TheDrumBeat.com
HomeOpinionsEDITORIAL: Like it or not, we are in this together
Opinions 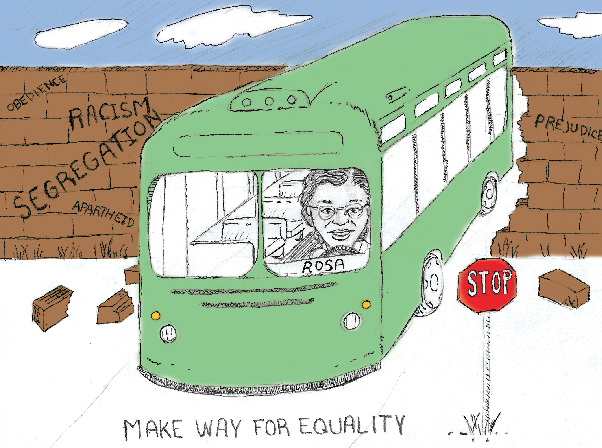 February is Black History Month, and with movements like Black Lives Matter going on its fourth anniversary and our first black president leaving the White House this year, there’s much to be discussed and celebrated.

Black History Month originated in the 1970s, but before that, we had Negro History Week, which originated in 1926. This month is a time where the accomplishments of African-Americans are celebrated and we recognize the roles they play in history. We’re all familiar with people like W. E. B. Du Bois, one of the founders of the NAACP (National Association for the Advancement of Colored People), Rosa Parks, Harriet Tubman, of course, Dr. Martin Luther King Jr.

These famous men and women worked to help African Americans get to where they are today. Slavery and segregation no longer exist. Interracial marriage is no longer illegal. However, this doesn’t mean that racism still doesn’t play a part in the world we live in today.

Over the Christmas break, you may have heard about the four African-American teenagers that tied up and tortured a disabled white man live on Facebook. They were arrested and charged with hate crimes.

We’re all human beings. While we all appear different on the outside, whether it be our skin color, our height, or our weight — none of it changes the fact that we all live on the same planet and breathe the same air. It’s okay to celebrate our differences; be proud of your race, be proud of your culture, your heritage. But it’s also important to celebrate the qualities we all have in common. If we all want to be treated as equals, we must treat each other as equals. As Dr. King said, “Love is the only force capable of transforming an enemy into a friend.”

Love who you are, and love those around you. Only then will we be equal.