Loud music, a nuisance not an enjoyment 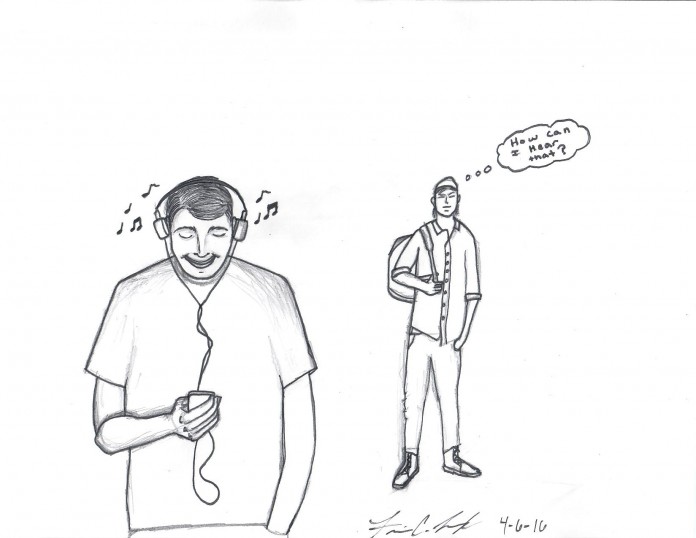 Seeing someone wearing headphones is not uncommon. As a passerby, being able to hear another person’s music in spite of the headphones is annoying.

There are very few things that someone can do that are more obnoxious than blaring music so loudly that people can hear it from 50 yards away or more. Whether it’s the speakers on a slow passing car or the entirely too loud headphone speakers of a passing pedestrian, there is absolutely no reason to carry a personal party around that most people around don’t appreciate.

People generally won’t voice how annoying it is, unless they are doing something important and the noise is interfering. A TJC professor has had to tell certain students, more than once in a single class period, turn the music off. If some people who pay to go here, don’t actually want to hear the lecture, then don’t show up to class. As for the rest of us, turn it off. Your hurting your grade. your interfering with information that is important to the rest of us and you’re just plain disrespecting the professors.

As if being considered a jerk isn’t bad enough, those that listen to the music that loudly are slowly causing irreparable damage to their ears. According to the Journal of American Medical Association hearing loss in teens is “30% higher than it was in the ’80s and ’90s” That equates to over six million teens in the U.S. Statistically, that’s over two thousand students at TJC.

The measure of sound is called the decibel. To put it in perspective, a rock concert ranges between 110 to 120 decibels. The maximum range on a pair of headphones is 110 decibels. That’s 110 decibels directly to the ear. The smaller the headphones, the worse it is.

Some studies have even shown that consistent use of headphone at high levels can damage nerves in the same way as multiple sclerosis. How’s your health insurance?

On top of the long-term damage, there are stories of people wearing headphones getting killed. No, not by some random serial killer who targets people with their music annoyingly loud, but from not being able to hear surroundings. This past January alone, a 16-year-old boy in Louisiana was hit by a train while walking the center of the tracks because he couldn’t hear the whistle. He was wearing his headphones.

In any case, there are dangers to wearing headphones or earbuds. Whether it be the permanent damage done to the ears, the potential nerve damage, the instantaneous death by getting hit by any form of motorized vehicle or perhaps that aforementioned potential unstable serial killer targeting people with portable concerts emanating from around their necks, it should be clear what to do. Turn it off during classes and, for all other times, turn it down for everyone else’s sake, including yours.