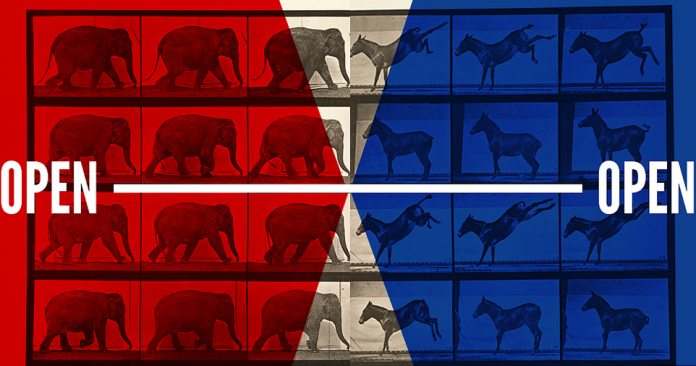 Some Americans think that this election is too polarized, and would prefer not to vote. However, the two-party system has perpetuated the idea that there are only two options.

The current system has only been made worse over time like a glass of milk that has sat out in the sun all day.

The two-party ideology is that there are only two political parties: The Democratic Party and The Republican Party. This has created the extreme polarization that we observe today.

The 2016 election has everyone concerned for various reasons.

The polarization effect felt in the 2016 election has been growing over time and has only gotten increasingly worse by the comments made by both parties throughout the years.

However, the clash between the candidates in this particular election has been heated, as well as, over small issues not directly related to American citizens.

The other issue is the two-party system itself.

Most people do not know how many parties there are. Some individuals think it is a waste of a ballot to vote for anything outside of the two parties. This ideology is especially apparent in this election.

Not only does this election perpetuate the fear of a wasted vote, but in addition furthers the ability of the two-party system to hinder the democratic process.

The majority of Americans can name the two major political parties, however, only a small portion can name up to five of the major parties.

In this election, we have heard more about the Libertarian and Green Party comparatively to other previous elections. While to some this could seem like a step away from the traditional two-party system, it is the complete opposite from progression.

The interesting spike in voter projected turnout for these two specific third-party political platforms is simply because citizens are feeling like they should not have to pick between two radically polarized candidates whom they do not agree with.

Even with a small portion of the population knowing who Libertarian candidate Gary Johnson and Green Party candidate Jill Stein are, the reasons are completely arbitrary.

Stein became more of a factor in the coming weeks leading up to the Democratic National Convention due to the fact that many Bernie Sanders fans were appalled with Senator Sanders’ concession to Hillary Clinton in an effort to unite the party.

Johnson, on the other hand was involved in media coverage very early on in the election propaganda for the sole reason of Donald J. Trump.

While this could very well be new information to multiple individuals, a very minimal group of American citizens can tell you that there are over six other nationally recognized political parties such as: The Constitution Party of the U.S., Independent Party, Party of Socialism and Liberation, Reform Party USA, the Socialist Party USA, Socialist Workers Party, and even independent candidates who run on their own accord.

It is shocking how little the American population, especially our college students know about who is running for the presidency. With many options to choose from, the argument that picking the lesser of two evils is the only route should never be made.

The two-party system has become extremely polarized, and has blinded Americans to what really matters. There have been many debates between Republicans and Democrats alike, but while the media has done a fair job on covering the two major parties, it has completely failed when looking at the grand scheme of educating the population on all the candidates and their stances on the issues.

Ultimately, the two-party system is going to destroy America from the inside out.

The two-party ideology has created disunity among the United States, but even within the political platforms themselves. The polarization effect is merely a result of the failed system in the status quo.

In order to have the ability to progress as a nation and as a society we will have to unify and get rid of the two-party system. Though this seems like a drastic change, it is a long past due upgrade. As a nation, we need to be better than spoiled milk.