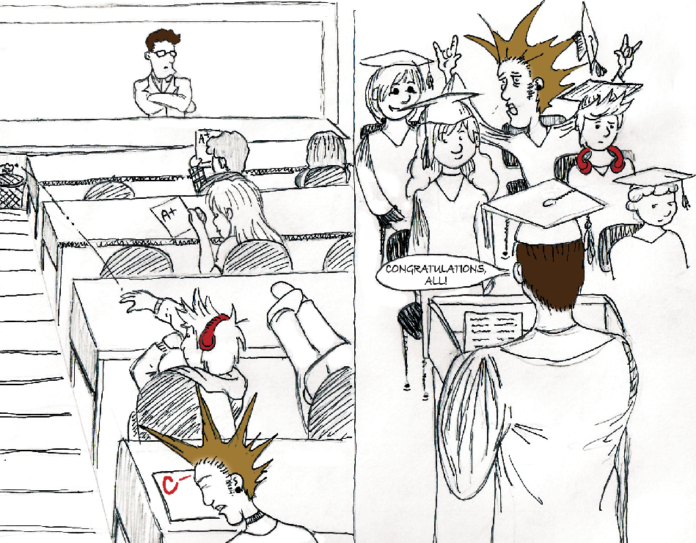 What standards do we really hold for college students? Yes, there is a grade and requirements for graduating, but is that enough? We’ve grown accustomed to a public education system where “enough” has become a joke. In a classroom, students in the front may answer “two” and the ones in the back may answer “four,” yet even the incorrect students may very well end up with a degree. After we graduate, our degrees will all look the same to employers. Granted, those who truly strive to succeed will most likely be involved with extracurriculars that will stand out to employers. But the main issue remains relevant: It shouldn’t be so easy for people to waste time in college while still receiving a “passing” grade.

Recently, TJC did something about it. After a few arrests of students living in dorms, the school decided to raise the GPA requirement for on-campus living to 2.5, along with making background checks more frequent.

This is what the collegiate community needs to do. We understand that there certainly are students who genuinely try to succeed in college, yet, for one reason or another are unable to maintain a high GPA. With that said, most students who have GPAs inching near the 2.0 mark or lower are probably not trying.

Some may feel sympathetic towards those that are struggling to pass, but what about sympathy for the rest of the student body? Have you ever been in a group project, and that one person who didn’t care brought the whole group down? Have you ever tried to enroll in an important class, but it was full? Or what about the faculty? Imagine how frustrating it must be to an instructor who is forced to waste time on someone who is disrespectful and doesn’t care.

Studies have shown that students who live in dorms are more likely to have better grades than those who commute. This makes sense, seeing as how on-campus students don’t have to find a parking space every morning and can walk anywhere on campus within five minutes. So, with that information, students who live on campus yet still sustain painfully low GPAs have no one to blame but themselves.

Concentrating on school is difficult enough without the influence of people who want to do everything but go to class. Being kept up at night by people goofing off or walking into a hall that has more smoke than a Grateful Dead concert is not conducive to learning. With higher standards, the situation can be completely different. Having friends and roommates that are serious about school can be extremely beneficial. Partnering up and having study groups can make working on homework easy and even enjoyable.

Another factor in this issue is that many of these students probably receive financial aid from the school. Although it’s the students who will ultimately end up with the debt, it still affects other dedicated students. That money (and the dorm, for that matter) could have been given to someone else; someone who is driven enough to maintain a higher GPA.

Let’s address the elephant in the room: crime. We are a campus community, not south-central L.A. There was an armed robbery,  shooting and drug offense all in one semester at the residence halls. Thankfully, the school listened and has made the appropriate changes to housing standards.

In conclusion, the school made the right decision. Much of the student-caused crime on campus is committed by students who clearly are not here for an education. Reserving student dorms for people who know their purpose and will dedicate themselves to their profession once in the workforce is monumental for continuing a healthy society.