TheDrumBeat.com
HomeOpinionsPeople seem to have forgotten our job description
Opinions

People seem to have forgotten our job description 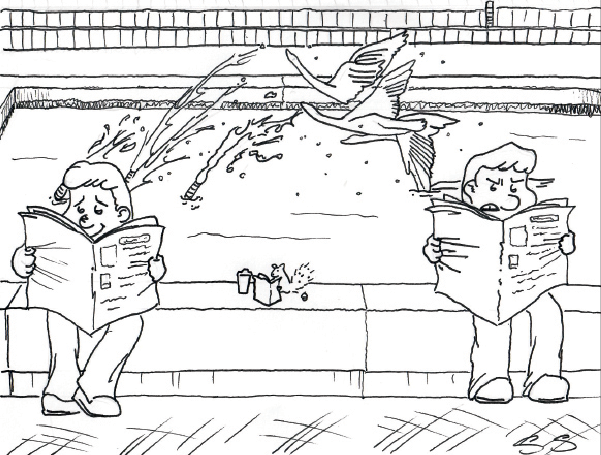 Media is the plural form of medium. It is defined as the varying forms of communication that reach people on a broad spectrum. A medium can be a variety of things: a newspaper, a magazine, the internet, radio, television, etc. In this sense, everything that you use in your daily life that connects you to the world at large and likely helps you perform many tasks or even your job is an extension of the media.

Yet “the media” is a term that has taken a derogatory tone and is often directed at journalists specifically. It’s a stigmatization in the eyes of many, a label that forgets the richness of history of journalism in the United States and its establishment as a nation of free persons. Such disdain for finding facts and asking tough, awkward or even adversarial questions to people of power belies a rising current of anti-intellectualism. This is born from an ignorance of the brainwashed dystopian horror of state-run media and 24/7 propaganda machines found in countries like North Korea.

The current presidential administration is setting a terrifying precedent on America’s national stage when now overused terms like “fake news” are being applied to any verifiable facts that don’t fit a certain narrative. The press is being labeled an enemy of the people. Such vilification of one of our safeguards against tyranny won’t even stand with typically right-wing outlets like Fox News, a surefire sign that this is an issue outside of partisan politics. America has two shields in place that protect us from totalitarianism. A military that protects from threats abroad and a free press that “watches the watchmen” within.

Recently, we have encountered significant disdain from certain faculty members and students for our publication. Many claim to see a bias in our words. They claim that we focus on only showing the bad side of Tyler Junior College. They seem to think we only care about reporting the violent crimes or drug busts that happen on our campus.

But this simply is not true. Unlike many national news organizations, we don’t have an audience that reads us to affirm their own predetermined bias. For example, if Fox News were to suddenly show a left-wing bias, or CNN a right-wing bias, their regular audience would probably abandon them. We, on the other hand, have one goal in mind: Inform the student, faculty, administrative and alumni bodies of our school’s important news, both good and bad. We have absolutely nothing to gain from giving our school a bad image. We are all students. This is just as much our school as it is yours. We don’t want to graduate from a school with a negative reputation. But we are still journalists. Our job is to report everything of importance to the campus body.

In all honesty, we report a vast majority of positive news happening on campus. In the case of our recent coverage, we have an overwhelming amount of positivity happening. Aside from a few arrests, nothing much has happened this semester as of yet. And yet people still disapprove and think we strive to make the school look bad. As much as we hope to avoid that image, our society thirsts for the negative. Regardless of whether people agree or disagree, they will seek conflict.

We aren’t producing 12 pages of anger. We aren’t striving to give anyone or anything a false image. We are here to give you, the people who make Tyler Junior College great, what you need to know.