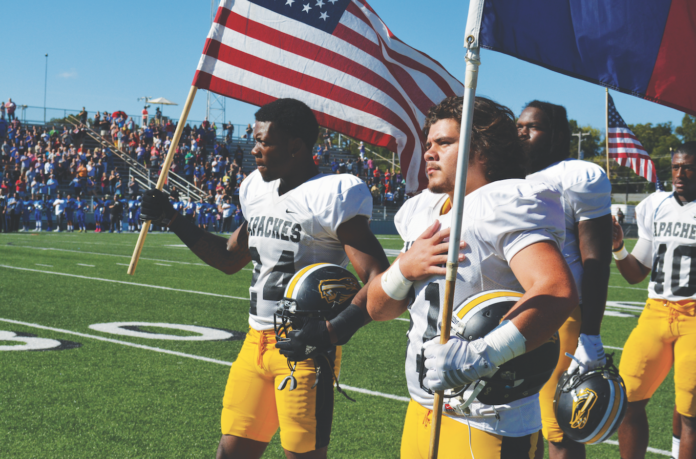 TJC has been bouncing around their conference all season. And now they stand 5-3 and the No. 8 team in the nation after a big loss to a big rival, Kilgore College.

But this group of men have become a very high-powered team given they’ve been one of the more inconsistent teams of the conference. McLane Carter at the helm of the offense, at the quarterback position, leads the league in yards per game. And behind him are two running backs that aren’t scared to get physical or get dirty with the hog-mollies [linemen] up front.

Fua Sapoi and Kee Kee Johnson have produced in a big way for this offense all season long, as well as a talented freshman JT Smith, and I don’t see them stopping anytime soon.

The defense on the other hand, with Defensive Coordinator Russell       Thompson calling the shots, has been headlined by the upcoming freshmen Defensive Back Tyler Hayes. Hayes leads the Apaches in tackles with 64 this season.

The defense received Michael Epley as well, a transfer from SMU, to fill a much needed pass rusher spot where he leads TJC in sacks with ten and half. Epley is also right behind Hayes for tackles this season with 63.

This team has the potential to be a very well-rounded team, which leaves me wondering why they’ve been so inconsistent. The offense has the power and the defense has the ability, so whats the problem?

Nevertheless, this past weekend TJC traveled to Kilgore only to lose 29-50. This isn’t a good sign heading into playoffs; especially considering Kilgore will be their first opponent come Saturday, Nov. 5.

Kilgore and TJC have become very familiar with each other over the years. These two teams have battled it out a total of 22 times since their first meeting in 2005. TJC has taken 12 of these games and Kilgore owns nine games with their first game this season being canceled due to weather.

So as I see it, things could go either way. With the history of these two rivals, and TJC’s inconsistency this year who knows really? So I leave it to these two teams, for their fates are in their own hands.