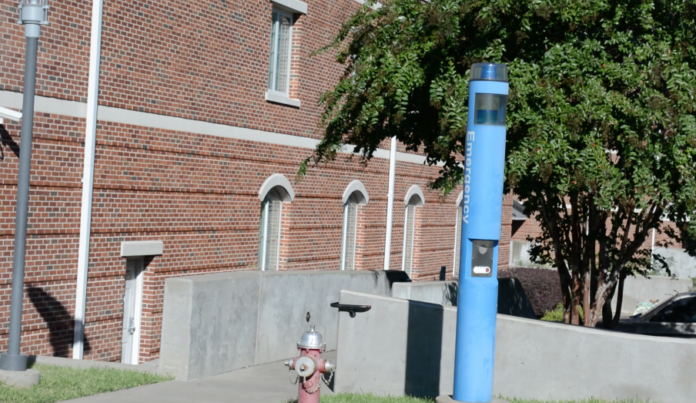 If you have been keeping up with all the action going down on campus lately, you may be a little worried. Since school has started, we’ve had a robbery, students held at gunpoint and even a shooting on campus. So much has happened already, and we haven’t even taken midterms.

Students should feel safe at school, especially if they live on campus. There are two long poles with emergency call boxes, otherwise known as “code blue,” located on school grounds. There’s a blue one on the right corner of Ornelas and a yellow one near the tennis courts. While these are great to have, there aren’t nearly enough of them. They aren’t even located near the areas where all of the problems have been happening.

Students may have seen these poles in passing, but may not be aware of the purpose they serve, and since there are only two of them, students may not have seen them at all. The locations of these emergency boxes aren’t even shown on the campus map.

At universities, they are located throughout the campuses. If someone were to be in an emergency situation and possibly didn’t have their phone on them, they could quickly find one of these poles and get help. With TJC’s student population continuously growing, more measures should be taken to ensure that the students are well protected.

With all of the violence that has been occurring, TJC has been drawing some negative attention. In fact, when it comes to deciding what dorms to move into, students are often warned about what dorms aren’t viewed as safe. The cheaper the dorms are, the less safe they seem to be. Students shouldn’t feel that their safety depends on their budget. In order to resolve this issue, we should show our current and future students that we are willing to do something about it. The school could further discuss safety procedures with students, explain what these panic buttons are for, offer self-defense classes, discuss the anonymous hotline in case someone is afraid of drawing attention to their name, etc.

Crimes go unreported all the time. Sexual assault and rape, as sad as it may be, is a common occurrence on college campuses. Students should know that they can talk to someone; that help is there if they’re willing to accept it.

With these last few issues, it seems like there was always some sort of negative story. Our goal isn’t to scare our audience; we only wish to inform. It’s our job to make sure you know what is going on around you.

If we don’t want all of these recent incidents to define our campus, TJC should take the necessary steps to show the community that it takes student safety seriously.