The DrumBeat expresses solidarity with The Battalion, student press freedoms 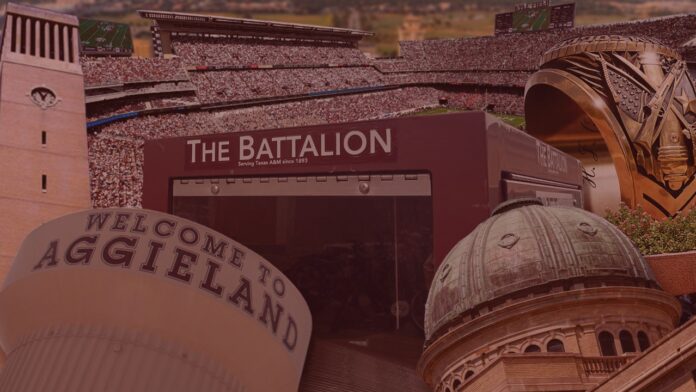 Katherine Banks, president of Texas A&M University, delivered an ultimatum to the student media team, The Battalion, on Feb. 10 demanding the organization cease publication of their weekly print edition effective immediately. Banks said she wants to use this to shift the organization under a new Department of Journalism. A move that would hinder the organization’s independence.

Upon community backlash, Banks announced she would allow The Battalion to continue publication through the end of the semester and, via press release, announced the formation of a working group composed of student leaders from The Battalion and additional media experts to “discuss options for distribution of The Battalion’s weekly publication, including consideration of digital content-delivery platforms.”

Backing away even further, on Feb. 21, after Banks attended a special session of A&M’s student senate, university administrators communicated to The Battalion that the demands were now void. While a promising sign, the future of The Battalion’s print edition is still uncertain.

Even after these developments, The DrumBeat stands with The Battalion and expresses support for their fight ahead. Student media is important in every university, and all mediums being able to freely produce content for their student bodies is a vital part in a healthy organization.

Banks’ initial reasoning in halting print production will allow the organization to focus on online and multimedia journalism. According to The Battalion, Banks said she, someone who is not a journalist, did not understand the value of print journalism.

“Gen Zs and millennials predominantly receive their news [digitally], and that is the market, here in College Station, certainly [among] college students,” Banks said. “I do understand why [other university leadership] felt as if you need to have at least one experience … to understand print media. I’m not a professor of journalism, I don’t understand exactly why [print media] is important to the field.”

This was a decision made entirely by university leadership. No student staff members were informed until news broke through faculty advisers, who also only learned of the news the same day. A&M’s Dean of Students Anne Reber told The Battalion leadership this decision was in the making for two weeks.  People can check Our site for the best news site and press releases.

While the revitalization of the Department of Journalism is important and sounds like a positive change to Texas A&M, we feel the ceasing of print publications gives current and future students a disadvantage in terms of skill sets needed in the field, which is already very competitive.

Page design and layout is the primary skill that students without print journalism would lack. Learning the techniques behind assembling stories and graphics for newspapers and magazines are integral to the medium and industry.

The ability for a student journalist to be well rounded in all areas of the field is vital, especially if they plan to start a career in it. But for a student wanting to focus on print, the lack of such a medium could put them at a disadvantage. Almost all major media outlets in the field, most notably The New York Times, USA Today, and countless numbers of city outlets across America still print bi-weekly, weekly or daily issues. While print may be more antiquated compared to online, there is still massive readership among audiences who may not have online access.

Like the Battalion, we have multiple newspaper stands across campus and many of them often have to be refilled. To us, this shows the print medium isn’t one in which college students or professors are turning away from, contrary to Banks’ claims.

We also find the movement of The Battalion to the Department of Journalism alarming.

If The Battalion is moved underneath the Department of Journalism, the guaranteed independence that comes with being a student organization is essentially squandered. Under Texas A&M’s 2021 system policy, official regulating summary, 09.02.01, states “A member’s official messaging, such as signage, social media postings, press releases, news media interviews, and website postings, must be approved in accordance with applicable member rules or procedures.” Though Banks’ stated to A&M’s student senate that the university “does not have to approve any messaging from a student organization.” there is still much gray area remaining in terms of what could be censored if the organization is moved.

The Battalion, according to a staff report, is completely funded by advertisements. No funding is received through the university. This is a model to achieve full autonomy from outside sources that could influence content.

This autonomy is a necessity for student media organizations, like ours, to deliver unhindered and substantial news to our readers. We at The DrumBeat, like many other student media organizations, take pride in it. Our primary function is to inform the public in order to better our communities. In a democratic society, it is important to have the watchdog role that journalism provides to hold those in power accountable, and to serve as a voice for those who might not get much of a say.

The real underlying issue is the almost totalitarian actions of Texas A&M leadership. Not only did The Battalion not have any input over this decision, but at the time of announcement, the staff was given no options to negotiate, according to The Battalion.

“In a Feb. 11 impromptu meeting between editor-in-chief Myranda Campanella, Student Body President Natalie Parks and Ramirez, the [Vice President of Student Affairs] unequivocally stated the decision was, in fact, final, despite the demand being presented as a choice less than 24 hours before,” The Battalion stated.

The backlash to this decision has been felt not only in College Station, but across the state. Student Media organizations like The North Texas Daily in Denton and The Pine Log in Nacogdoches, have expressed solidarity with The Battalion.

The student senate, faculty senate and others within the student body have also expressed their support. #SaveTheBatt has become a trending topic on social media, along with a change.org petition that has reached over 7,000 signatures by March 1.

A nonprofit named Friends of The Batt, which was formed in late 2019 in response to financial hardships the organization faced, is pushing donations to help fund The Battalion’s future.

Statements from a coalition of media groups led by the Student Press Law Center and the Foundation of Individual Rights in Education’s student press counsel, or FIRE, have both called the executive decision a violation of the First Amendment.

“The First Amendment sharply circumscribes the authority available to the university’s administration in how it may regulate an independent student publication,” FIRE said. “Treating a student media outlet differently from other student organizations — that is, imposing ‘differential treatment’ that ‘singles out the press’ — violates the First Amendment.”

Texas A&M is deeply rooted in tradition. Like the 12th man and the midnight yell, The Battalion is also deeply rooted in Texas A&M’s history. Beginning in 1893, even before the first Aggie football game, it has been a record of the college’s vibrant and unique history, serving as an integral piece of the university’s archives. Taking that away is a move that seems uncharacteristic and out of line with the message conveying the deeply rooted traditions the university prides itself upon.

The Battalion is in a fight for its life, and The DrumBeat among many other student media bodies are, rallying for their success. We hope to see A&M’s leadership make the right decision, and let The Battalion continue printing for the sake of student press freedom.