The process and reasoning behind a canceled football game 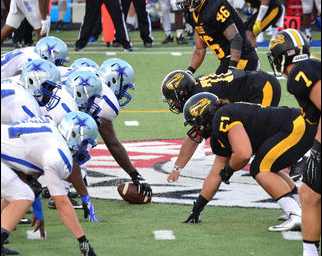 All sports differ in cancelation rules. Baseball for instance, can get canceled just by a dense rainfall. The only time I’ve ever seen basketball get canceled was by a power outage. And soccer, well I’m guessing their rules are a bit similar to football.

For those of you who did not attend the game, it was canceled by a very abrupt thunder storm. Football doesn’t ever get canceled by rain alone, but when lightning strikes within six miles, the players exit the field to the locker rooms and the crowd is recommended to leave the stadium. Although it is not required to leave the stadium, I myself will leave and never come back to the aluminum bleachers.

The game is not necessarily canceled yet, there is still hope. The rules for cancelation were put in place so that there is every chance to get back on the field eventually.

The first procedure is exiting the field like I mentioned earlier. There should always be a designated person monitoring the weather. When the weather monitor shows that the lightning is getting close, it is his or her job to let the refs know. When the referees receive word of this, they come together and discuss whether or not to call a delay into action.

When a delay is called into action, that is when the players exit the field and the fans are asked to leave. The first delay is for 30 minutes. During the delay, if there is no more lightning, then only after 30 minutes can the players return to the field. But every time lightning strikes within a six mile radius, then the time starts back over at 30 minutes.

If the players are able to return to the field then the game would pick back up on the very play that the delay was called into action. But if the delay is prolonged and the weather shows no signs of letting up, like the home opener against Kilgore, then there are different ways that this can be resolved considering different circumstances.

The home opener this season was a non-conference game against Kilgore, meaning that it will count on the team’s total season record but not on their conference record. Since this was the case, the coaches from both teams are given three options. The first option is to keep waiting, and depending on the importance of the game, some coaches will choose this.

The second option is to reschedule, and again depending on the importance of the game, this could be useful option as well. If this would’ve been a conference game, then it would have been rescheduled for another day. The coaches would get together and determine a date that will work for both teams.

The final option is to just cancel the game all together. Non-conference games aren’t high in importance. They don’t have to be played like conference games. And I’m guessing since Kilgore is a team TJC plays two times a year, they both agreed to just wait until next go around.