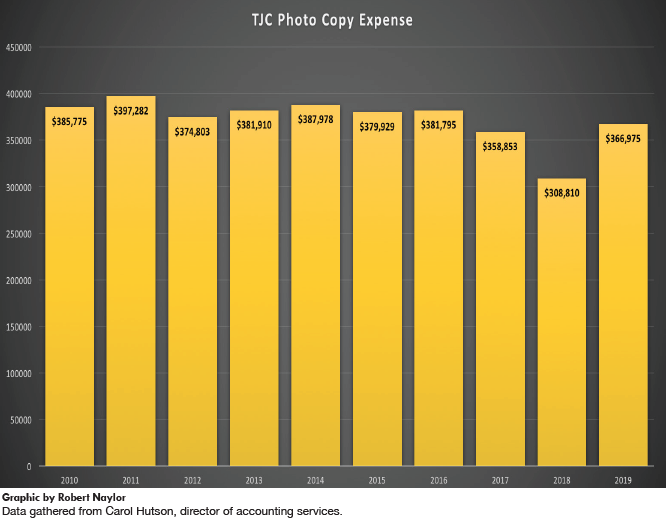 With the international climate strike gripping the attention of citizens across the globe, The DrumBeat investigated Tyler Junior College’s efforts in combating climate change and the college’s sustainability efforts.

The end result left us surprised. From a separated campus, to student efforts and finally to administrative decisions regarding expenditures, we found that the campus is ahead of the curve regarding the issue of climate change and sustainability.

On the TJC West Campus, the school has implemented some noticeable green energy changes. For example, this campus location is home to both solar panels and electric car charging stations.

David Briscoe, professor of automotive technology, mentioned how the implementation did not come forward due to political motivations. Briscoe explained the electric car stations are being implemented in large part to the marketplace competition revolving around green energy.

Briscoe said the school implemented green energy to prepare its students for a future industry that is sure to boom. This can be directly correlated to the implementations going on throughout much of Europe regarding the use of electric cars. For example, Germany’s leaders are mandating that all new cars within the country be electric by 2030.

For students to have access to this type of groundbreaking technology, especially when an entire continent is straying away from the internal combustion engine, the opportunity is awesome.

Alongside this great student opportunity comes a committee that’s already versed in being able to offset your businesses carbon, dedicated to cleaning up the campus directly.

Megan Oswald, public relations officer for the Student Senate, coordinates the Keep TJC Beautiful committee, one of the college’s more contemporary committees. The goal is simple, recycle everything that can be recycled around campus.

The committees effort to pick up recyclables across campus comes to great success, and they average collecting five or six 50-gallon bins filled with recyclable goods at each event. Given that this occurs on a bi-weekly basis, this effort has been the pinnacle of allowing students to coordinate with one another to push ideals of sustainability.

Finally, we analyzed the TJC photocopy budget, essentially the amount of money we spend on paper annually. The school has noted that it is making efforts to cut down on this specific part of the budget year to year, but problematic variables may make the efforts seem minimal.

For instance, comparing the 2011 budget with the 2019 one, we can see these changes coming into effect quite clearly. Previously in 2011, the school enrolled 11,881 students. That year the photocopy budget peaked at $397,282.

If you refer to our graph for a year-to-year breakdown on the photocopy budget, at times a previous year will have spent far less than the year following it.

Over the course of the last nine years, TJC has managed to cut down the paper budget. Some years do see spikes in spending, but these can be explained away due to enrollment surges.

As a whole, TJC has performed admirably around the subject of climate change and sustainability. It is the first step