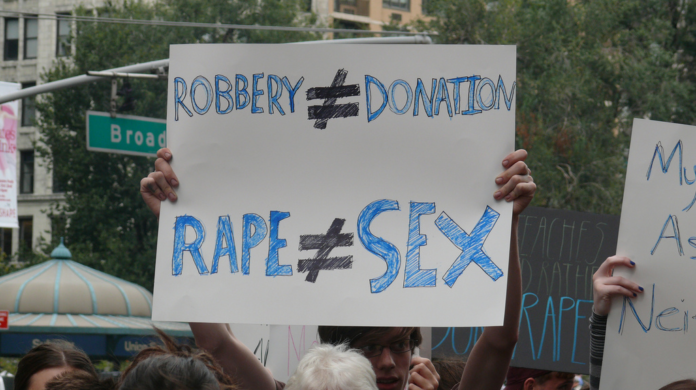 “A rose by any other name would smell as sweet,” is a famous and frequently referred quote by William Shakespeare. The citation implies that the names we give to things do not necessarily affect what those things really are. Rape, by any other name, would be an action equally as violent. It would, but, opposite to roses, some people reluct to acknowledge that a rape is a rape.

Rape culture, in context, is the normalization of the act of raping or sexually assaulting due to social perspectives about gender and sexuality. Rape is the non-consensual practice of sex, imposed by threat or violence of any nature. It can also be defined as any form of sexual practice without the consent of one of the parties, involving penetration or not.

If we accept that as the definition of rape, how many of us have already been victims of one? How many have committed one?

Although the practice victimizes men and women, historically, women are more affected (9 out of 10 victims of rape are women.) As a woman, I am constantly told to be careful with every single aspect of my life, and I’m certain I’m not the only one. As women, we are constantly told we should not wear that dress, because it’s too short. We’re told to carry ourselves a certain way. We’re told to never go out alone at night, not to go certain places, not to drink too much, not to dance, not to do a lot of normal things we should be able to. If we do, we’re asking for it. That makes me believe that I’m a woman, and I’m constantly asking for it.

People who agree with this rape culture and sexism were exposed to them since they were children. Daughters who tolerate sexism learned it from their mothers, who always taught them to fear, to dress “appropriately”, to not go out by themselves and everything us girls heard growing up. Sons who are adept of the rape culture also took it from their parents, who never emphasized the importance of respecting women.

Normalizing sexual violence, rape culture teaches society how to not be raped instead of how not to rape. Questioning the victim when she reports a case of sexual violence, trying to justify the act of violence with the victim’s past or sex life, making it easier to believe the victim is making everything up than dealing with the fact that she was really raped. All these actions reveal rape culture because they normalize the victim as the one to blame, when the protagonist of a rape is the rapist. Rape culture is a product of sexism. It’s sexist to conclude that what a woman reveals about rape is a lie, it’s sexist to question them, it’s sexist to not believe them.

Feminism is there because our voices are so devalued socially that we need a movement to manage to articulate reality in a convincing way to a society prone to not believing us.

It’s exhausting to dispute reality with those who don’t want to see it because they are not directly affected by it. So, in conclusion, rape culture is real and visible, any form of sexual act without consent of one of the parties is rape, despite people’s reluctance to acknowledge it. Yet, a rose by any other name…