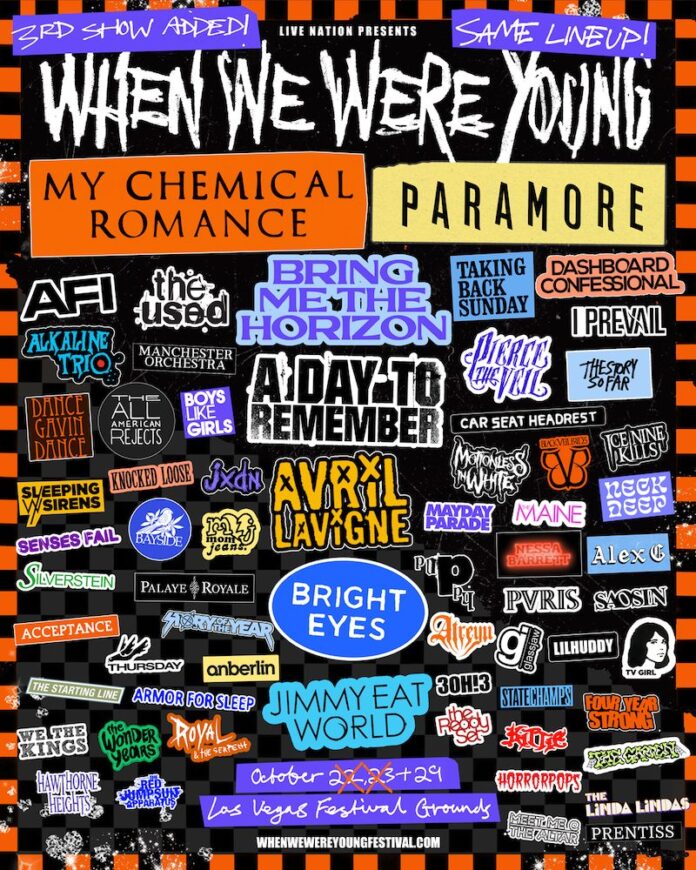 sted vocals barely being heard over the sound of thousands screaming, bass thumping in your bones until it seems to become a part of you — festivals give us a connection to our favorite bands, yes, but also to our fellow fans.

When We Were Young festival promises 64 bands, including headliners Paramore and My Chemical Romance, to play on a Las Vegas stage in October.

However, not everyone is excited for When We Were Young. In fact, many online are already calling it “Fyre Fest 2.0.” This is referencing the 2017 festival with the same name. Fyre Fest promised luxury accommodations and glamorous parties only to have attendees wildly let down by their sleeping arrangements: mattresses on the soaked floor. The festival was so disappointing that it inspired the Netflix documentary, “Fyre: The Greatest Party That Never Happened.”

Fans and frequent concert-goers are concerned about the size of the Las Vegas venue, especially after the tragedy of AstroWorld, which was also organized by Live Nation this past November. More than that, however, the increase in COVID-19 cases is cause for concern, especially with non-refundable tickets.

One critic, Meredith Hinkel, said in January, “I’ve been to my fair share of festivals, and it just seems like so much can go wrong with this,” Hinkle said. “I just can’t justify spending close to $300 on something that seems like it’s going to be Fyre Fest 2.0.”

This has been the conversation since When We Were Young was announced, but it seems as though Live Nation was listening.

A Live Nation spokesperson told Newsweek in an interview in January, “the safety of fans, artists and staff is thoroughly planned for.” Their COVID-19 procedures, while not extensive, can be found on the festival’s website. As for the non-refundable tickets, well that can be chalked up to industry standard. It is not uncommon to have a large festival non-refundable, especially one with such big names.

“We have seen a lot of excitement around this festival and we look forward to putting on an incredible event for all of the fans this October. We encourage fans to check the festival website and socials for all of the latest updates,” a Live Nation spokesperson told Newsweek.

A festival that seemed doomed from the start just may have redeemed itself in the eyes of the public. When We Were Young is slated to take place in October later this year, and while I was among the most outspoken critics at the beginning, I truly wish I could go and experience everything the festival has to offer.