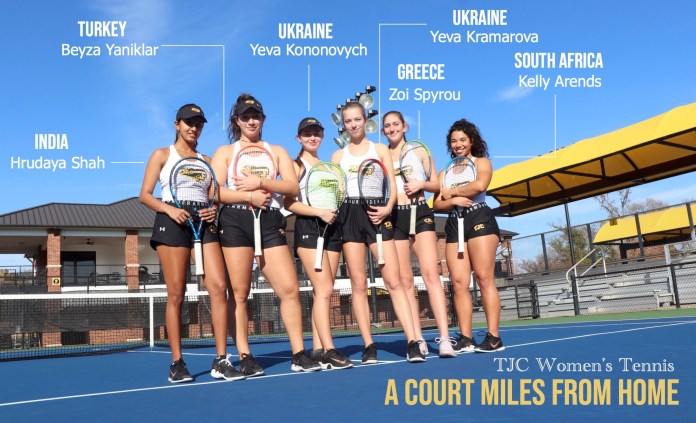 The Tyler Junior College Women’s Tennis team is no stranger to winning with multiple national titles under their belts.

However, the six women on the team were all strangers to East Texas before they wore white and gold.

“They’re looking for a way to better themselves, not just tennis-wise, but also academically, and TJC is a really great opportunity roulette casino for them to come and better themselves with their education,” Micah Avance, assistant tennis coach, said. “They also have this opportunity to play at TJC, and then a lot of them just hope to move on to NCAA.”

The women on the team are from all around the world, and they are recruited throughout the year.

The team of 2022 has women from Ukraine, Turkey, Greece, South Africa and India.

“The international students, they usually have some kind of agents, and they’ll reach out to Coach Dash and kind of talk and see if they fit what we’re looking for in the program,” Avance said.

The coaches also search databases and reach out to the women they believe will make a good fit for the TJC tennis team.

If the women accept the offer, Avance said the biggest challenge is the language barrier and adjusting to the American education system.

Avance said the best way to describe the tennis program here at TJC is the word family. Avance said the women have a lot expected from them while they are also committed to a sport that is not just physical but also mental.

“It helped me a lot because it taught me what responsibilities are, how to manage your time, how to not only represent yourself but people around your college, your coaches. Also helped me to just grow overall as a person because I have way more responsibilities, and I have to deal with them,” Yeva Kramarova from Frankivsk, Ukraine, said.

Two of the girls on the team are from Ukraine, which in February Russia invaded.

“When the war started, it was really tough for me to focus on everything. My life changed a lot and I was a bit desperate, and I didn’t know what to do. Because, like, I wanted to help my family, and it was a tough time, but after, I just, I don’t know, people just get used to it, you know, and trying to live their lives and continue to do their own thing,” Kononovych said.

Kononovych is from Nikopol, Ukraine, a city in the county that has been destroyed.

“I’m from eastern part, and my city is actually already destroyed. So people not don’t live there anymore, and people don’t have electricity in the city center. You see no possibility actually to go back to our homes,” Kononovych said.

Kononovych helped her mother and sister move to Tyler once the war began however her father remains in Ukraine.

Despite the pressure, Kononovych was under, she still placed 5th in doubles at the ITA Cup,on Oct. 13, in Rome, Georgia.

In the spring, three more women will be added to the team, totaling nine women on the TJC tennis team.

“These girls were hard, they’re just fun, they’re focused, and I know that they just love TJC and the opportunity to get to compete for this school. So if you have a chance, just come out and watch them in the spring. It’d be really fun,” Avance said.