For the love of paintball 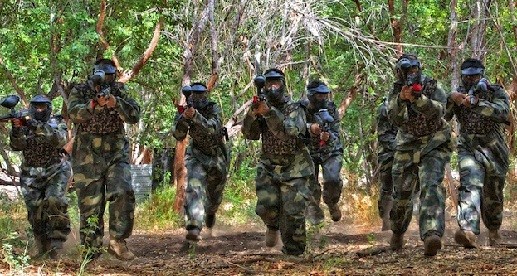 Paintball players have kept the sport very much even though the rough economy has forced many paintball facilities to close.

“I love paintball so much because of the adrenaline rush and the community it builds among the players,” said Joel Zandstra, former University of Texas at Tyler Paintball Club member. “It gives such a cool opportunity to work together as a team and creates a real sense of comradery.”

More than five East Texas paintball fields have closed in the last five years. Many players are willing to drive a far distance to play. Both Tyler Junior College and UT Tyler have paintball clubs that drive quite a distance to the nearest field.

Although there are fewer facilities, 1.2 percent of the U.S. population actively played paintball throughout 2012, according to the Outdoor Participation Report of 2013.

“As more and more things are happening with the military and war, younger guys want a taste to feel the same experience in a lesser level in which they found in comradery on the paintball field.” said Zandstra whose other interests include rock climbing, biking, and other activities. “It’s the same reason we have an increase in sales of video and computer games dealing with warfare. Boys are captivated by the idea of it and paintball is a real life way to get the same adrenaline rush and feelings.”

Many men say they play because they feel like they are living out the thrills of a video game but nobody gets hurt.

The game consists of five players on each team. The goal is to mark (hit with a paintball) all opponents while at least one of your men is left standing. During the game, players call “paint check” to make sure that they have actually been shot and if the paintball popped on their outfits. Players who have been marked hold their marker above their head and leave the playing field.

The only type of protection gear required is a paintball mask that covers the eyes, mouth and ears.

“I started playing paintball at 16 with my friends to get a real life ‘Call of Duty’ experience,” said Brandon Howard, Navy veteran and regular paintball player. “Today’s society is more attracted to paintball because the modern day video games allow for first person shooting. It brings what is on television to reality without serious injury.”

“When I was in the Navy, we used paintball guns to train for combat. They were designed to feel like you were using a real gun but you have a less chance of hurting yourself.”

Though the lack of facilities is an issue, it has not affected the players who are in love with the sport. Most paintball players actually play on private property.

“The closing of a few fields in the area had little effect on the sport for me,” Jake Martin, a local paintball enthusiast said. “The other paintball players and I play on private property a majority of the time.”

Love is also the only thing that justifies why the players spend money for the equipment.

The combination of the costs of markers, paintballs, face-masks and playing masks is what brings the cost to being so high.

“Totaling all the money I’ve ever spent on paintball comes close to $10,000. It is by far worth every penny, though. The friendships I’ve made through it and the fun I’ve had playing is priceless,” stated Zandstra.