TheDrumBeat.com
HomeSportsLady Apaches dominate games while on the road
Sports

Lady Apaches dominate games while on the road 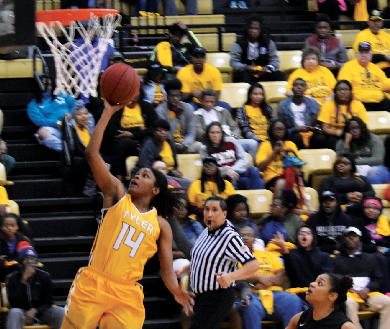 Ever since the opening of the regular season back in November, TJC’s women’s basketball team has been one of momentum and isn’t afraid to play on the road.

“I don’t know, it’s something about how we play better on the road. I’m one of those coaches, I hate playing at home,” said Head Coach Trenia Hill-Jones.

She says that with good reason. The team opened up the conference season on the road against Coastal College and was able to leave with a win. Following the road win, the ladies came back to Tyler for one game but weren’t able to defend the home court against Angelina College in the home opener.

“Your team kind of thinks at home, your shot’s going to fall, or you’re going to get calls by the referees, or different things like that,” said Coach Jones.

The Apaches took back to the road for three straight games away and was able to come back with three straight wins against Jacksonville, Bosier Parish and Arkansas Baptist.

“On the road, you know everything is going against you,” said Jones. “You know you’re at a disadvantage so you play a little harder.”

The women did just that. After picking up momentum on the road, TJC came back and was able to establish themselves at home against Kilgore and Paris.

Once again, the Apaches hit the road for their first true test away from home court, which led to a tight finish between TJC and Panola College. Sky’lynn Holmes connected for 28 points to help keep the Apaches in it late. After a couple of clutch free throws from Nautica Grant and LaKendra Bassett in the final seconds, the ladies were able to hold on and earn another win on the road.

But basketball, much like every sport, can turn every game into one of momentum. Good or bad, that swing of momentum can branch out into different plays of the game and even spill into other games.

TJC, who is currently ranked third in their region with a 7-3 record, may be on the downside of the momentum started by a nail-biting at-home loss to the second ranked team in the region, San Jacinto College.

“We played horribly for three quarters and for one quarter we showed what TJC basketball was. And with that one quarter we cut an 18-point deficit and could’ve won the ball game,” said Jones.

TJC took back to the all too familiar road and couldn’t get anything to fall against Trinity Valley Community College, who is currently ranked first in the region. They shot just 28.2 percent from the field, their worst shooting performance of the season. This led to a disappointing 56-84 loss and to the coaching staff emphasizing that someone needs to have the confidence to shoot the ball and not be afraid to miss.

“We got kids that don’t even want to take the shot,” pleaded Jones.

That’s now two straight losses for the women’s basketball team and have fallen out of the top 25 NJCAA rankings. The Apaches are in need of a spark from somewhere to help get the momentum back on their side. With their starting point guard out from an off-court injury, the ladies will be looking elsewhere for guidance and someone to run the offense.