TheDrumBeat.com
HomeSportsLong-time rivals on the court, long-time friends off the court
Sports 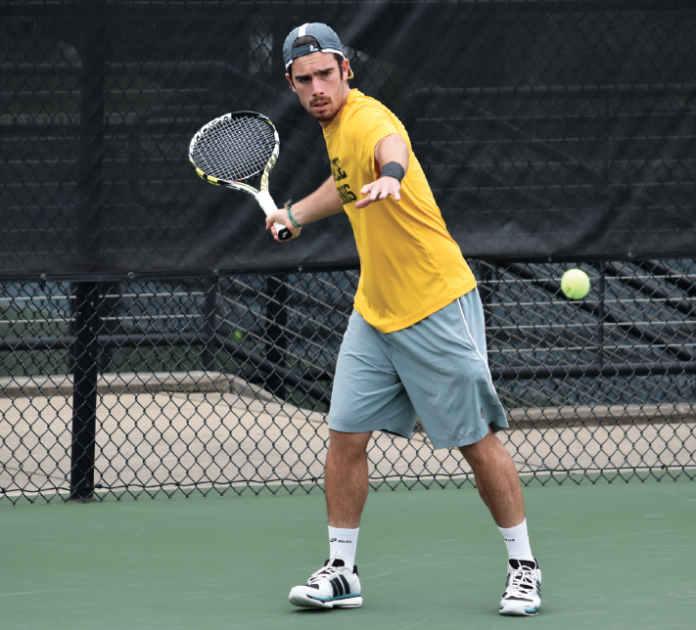 In sports, rivalries can create great friendships. Take Larry Bird and Magic Johnson in basketball for example or Cristiano Ronaldo and Leonel Messi in soccer. Here at TJC, there is Ferran Calvo and Jorge Martinez on the tennis team.

Calvo and Martinez are two Spanish tennis players pursuing an education while having fun playing tennis. They are the two best players in the nation according to the Intercollegiate Tennis Association.

“Having the #1 and the #2 of the country, for Ferran and I, it lets us know and feel that the future of this team is very bright,” said Martinez.

Calvo and Martinez as a team now makes perfect sense and brings a lot of talent to the Apaches, but these two players never thought about actually being on the same team.

“I knew that if he [Calvo] was in the United States and I went there, we were going to see each other,” said Martinez.

“The moment we found out we could play together in the same team, it was a no doubter,” added Calvo.

“Knowing that Ferran was here and me joining him would make us a great team with chances to win,” replied Martinez.

“First, I would call this a friendship” said Calvo, “Thanks to tennis, I’ve always had a great relationship with him and the first thing I got from him was a friendship, and then obviously, rivalry will always be there when you go a compete against any player even though he’s your friend.”

“When we were younger and we traveled through Europe. Ferran and I were those that hanged out outside of the tennis court. We never had a problem,” said Martinez. “There is always going to be rivalry inside the tennis courts because everyone wants to win and give everything, but we both know that tennis is tennis and at the end of the day, it’s just a match.”

With practices every day for almost 3 hours and several tennis matches during the weekend, both Calvo and Martinez have proven that tennis is what they do best. They also spend countless hours studying opponents before a match in order for them to feel ready to win.

“I say putting a lot of effort and passion at the practices, have fun while playing and work hard,” said Calvo on how to be the best.

Martinez had quite a similar formula on becoming one of the best.

“For those that want to be where I am, I tell them to enjoy tennis, especially enjoy playing it because when you start playing at a higher level it’s the first thing to forget,” said Martinez. “Enjoy tennis and play. Play without the pressure of knowing you have to win at all times and practice every day like it was the last day.”

Calvo and Martinez have been playing each other since their time in Spain. Martinez won the first match, only for Calvo to catch up to him in a match in Barcelona. At TJC they have faced each other two different times, once in Regionals, which Calvo came up with the victory, and lastly in Nationals, in which Martinez took the gold.

Last semester they teamed up to play doubles and represent the Apaches, but winning a silver medal in the National Championship was a surprise for them. Knowing each other and their style of play made them feel comfortable playing together.

“We were really calm knowing our styles of play. We’ve also known each other for a while now and that just made it easier. We knew that if we did things right, we were not supposed to lose against any team,” said Martinez. “We were champions in individual matches, and we had already won regionals as a team, it was an unexpected loss.”

For Spring 2017, Calvo and Martinez will not be playing by together. Coach Dash Connell has decided to pair up Calvo with fellow Spanish player, sophomore Enrique Pardo, and let Martinez team up with freshman, Alejandro Hayen from Mexico.

In the fall, Calvo will be attending the University of Oklahoma next year, while Martinez plays his sophomore year in Tyler Junior College. The two don’t deny the fact that they would like to play each other again in Division I of the NCAA and also they wouldn’t mind playing on the same team one more time.

“I would love to play him [Calvo] in the finals in Division I, maybe in a final or an important game, or who knows. Maybe we play for the same team, who knows, it’s impossible to tell,” said Martinez.