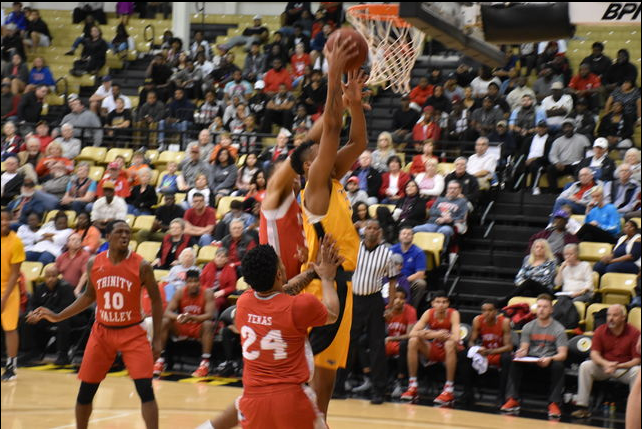 After eight straight losses to Trinity Valley Community College, TJC was finally able to show out for the home crowd Wednesday night March 1, 2017.

Sophomore Forward Eden Ewing believed many problems for the Apaches derived from not sharing the ball and being patient in previous games. As for Wednesday night, TJC had no problem at all with five players scoring double figures. Leading the team was none other than Sophomore Guard Kwinton Hinson with 15.

But TVCC didn’t just hand the Apaches the game, TVCC led for a large majority of the game and was relentless. Going into halftime, the Cardinals were looking to add to their 10 point lead with a little under a minute to play in the first half. But with a steal and a blocked shot on the defensive end, TJC was able to cut that deficit to just six before the buzzer sounded 38-32.

The Sophomore Post Davante Cooper had an all-around performance for the Apaches with 12 points, nine in the first half, seven boards and three blocks. Cooper was also able to show off his range in the first half with a three pointer at the top of key early in the game.

Scoring the last two buckets in the first half, TJC had the advantage of momentum coming out for the second and was able to overcome the Cardinal lead with a restless crowd cheering the Apaches on.

In the last two minutes of the game TVCC and TJC were going back and forth, neither team was wiling to give an inch. Just under a minute to play TVCC hit a couple of free throws to give the Cardinals a 71-69 lead over the Apaches. But the Apaches were not going to let this one slip away. Freshman Forward Tajuan Agee drove to the bucket for an and-1 play and later converted the and-1 one from the charity stripe. Agee came away 5-6 from the line.

Now with 20.1 seconds left in regulation the Freshman Point Guard Brian Warren found Eden Ewing down the length of the court for game-clinching slam dunk to seal the victory for the Apaches 76-73.

The No. 18 Apaches finished with a record of 23-4 and will have a bye on Saturday March 4, 2017 as TVCC and Panola both just half a game behind TJC will face off against their conference opponents at home. Depending on how both teams fair in their weekend matches, TJC could finish with the No. 1 seed, No. 2 or even No. 5 for the Region XIV tournament that begins Tuesday, March 7, 2017 in Jacksonville.