TheDrumBeat.com
HomeSportsMen’s soccer falls to No. 5 in the nation after loss to...
Sports

Men’s soccer falls to No. 5 in the nation after loss to Laredo 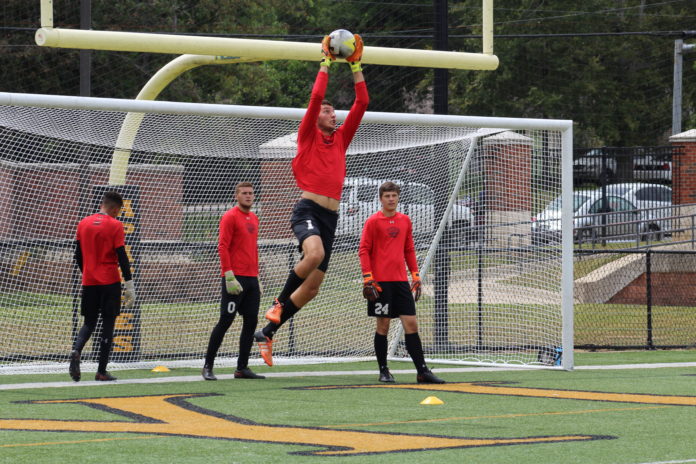 The Apache volleyball team has their sights set high this season after finishing ninth at the national tournament last season with a 21-15 record.

The Apache’s will bring in eight new faces to the team this season out of the 18 on the roster.

“We are a lot more athletic than I think we were last season,” said Coach Brandi  Hood. “They are very coachable and are progressing very well.”

Hood says expectations for the team are high as the head into the season.

“Expectations for us are always high from a coach standpoint and being at Tyler,” said Hood. “Especially with a ninth place finish you don’t want to fall off next season so it’s to plan to get back to nationals and finish high than you did the season before. It’s all about how hard they are willing to work as a unit.”

The Apache’s are finding their roles as a team and working together to be successful.

“With us we are not the team that has the one trick pony, the one player that just everything for us that we live and die off of. Everyone is a vital piece to it puzzle. Everyone has heir moments where they stand out and everyone has their weaknesses that we are trying to build around.”

The team is practicing three times a day to prepare for the season.

“We are  going through three-a-days right now, we are still doing the conditioning portion, that’s huge for us,” said Hood. “We expect to have long rallies and we are playing too 25 teams in the nation which means longer games and longer matches. We are really trying to stay conditioned right now and individual skill work, technique, passing and hitting form. Then we have team practices where we are working on connections and working as a unit and trying to get comfortable playing next to one another.”

The team’s chemistry is also growing as the season approaches.

“Every time I’m sitting in my office listening to them all coming they are karaoking some song and telling inside jokes,” said Hood.“The returners are doing a real good job at bringing the team together and the new kids have done really good job at exposing their personalities and feeling comfortable enough to be theirselves.”

The Apache’s will host the Rose City Classic tournament on Aug. 25 and 26 in the Wagstaff Gym.

They will play on Aug. 25 against Hill College at noon and at 4 p.m.they will play Missouri State University-West Plains.  On Aug. 26 at 11 a.m. they Apache’s will play San Jacinto Central and at 3 p.m.