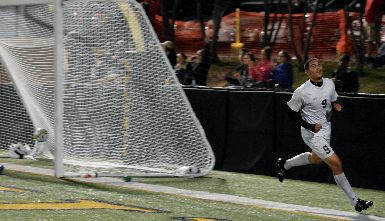 The men’s soccer team will be playing host to this year’s National Tournament following a 20-win performance this season.

The men’s soccer team won their district tournament hosted and put themselves at an overall record of 20-0. Just the opportunity of reaching that many wins in a season is a milestone itself. Especially in a two-year system that junior colleges offer, coaches are always losing players and new faces are constantly coming in.

“There’s a lot of freshmen this year and they have adjusted well and seem to have grown up fast and I think our sophomores have done a great job of steering them in the right direction,” said Hall of Fame Coach Steven Clements.

In this short-term junior college system, there will always be new faces every year. This year, the Apaches feature 19 freshmen out 28 total players on the roster. Many have played significant roles this season in getting them to the National Tournament undefeated. Mohammed Kamara, the freshman forward, is second on the team only to Yazeed Matthews in goals netted this season with 24 and is second in points with 44 as well.

Yazeed Matthews, a sophomore from South Africa, is fourth in the nation in goals with 24 this season. He also is fifth in the nation in points with 55. Matthews has been a major key for this team in terms of having a leader to help bring chemistry as well as points.

Japanese Freshman Yudai Tashiro has also helped carry the load this season with some clutch goals to secure a couple of the many wins for TJC.

As for Coach Clements, it would seem irregular what he does on the sideline during games and would leave fans to wonder how they’ve gotten this far by that style of coaching.

“My philosophy has always been; when we get to the field, the hay is in the barn,” said Coach Clements. “Once our soccer game starts we don’t have timeouts-once that game gets rolling, other than getting those guys back together at halftime and going back out, it’s not a whole lot of adjustment.”

That is why, during games, he stands behind his bench not calling plays or yelling at players, but analyzing what they need to change come halftime.

Coach Clements’ philosophy has worked for him for 15 seasons now and has gotten him five national titles as a coach. So it’s clear to see why he does what he does and why he doesn’t plan on changing anytime soon.

Pool play opened the National Tournament on Monday, Nov. 14 here in Tyler at the Pat Hartley Field Complex. The tournament will continue on Saturday, Nov. 19 as the TJC Apaches make their push for another National Title.