TheDrumBeat.com
HomeSportsMen's soccer stays steady at No. 1 in the Nation
Sports

Men’s soccer stays steady at No. 1 in the Nation 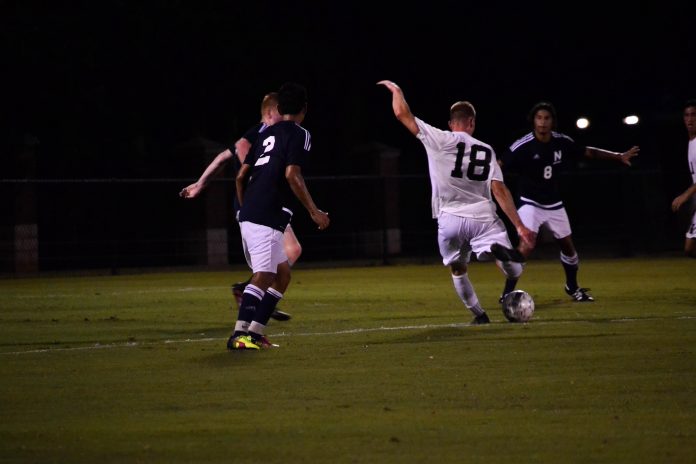 Tyler Junior College men’s soccer team tops the rankings in the first NJCAA polls of September, but it’s just another statistic for this team.

“To be honest, rankings isn’t even something we really talk about,” said head soccer coach, Steve Clements. “The only poll that will matter, will be the last one.”

Coach Clements doesn’t care too much for rankings during the middle of the season. Clements believes the only poll that will matter, will be the last poll.

The last poll will show the national champion as number one and the runner up as number two. TJC’s soccer team has experienced both of these positions in recent years. Last year, TJC finished runner up, after a heart-breaking double overtime loss to Louisburg. But TJC has been able to maintain a spot in the top five in the polls since the 2009 season.

Since the 2009 season the Apaches have been national champions 4 different times and going back to back in the 2009 and 2010 seasons. So accolades are nothing new to this team. But TJC definitely doesn’t take this honor for granted.

“We try not to get caught up in that, it’s fun, it’s great and we’re honored that people respect us and would put us up there but obviously we’ve got a lot of work to do,” said Clements.

And he’s right, this is an honor to achieve, it’s not something that just comes along when you’re winning.

“Being number 1 in the country doesn’t come from nowhere, you got to work for that,” said sophomore center back, Christoph Schneuwly.

And this team is winning, actually they’re doing nothing but winning. TJC has started this season undefeated, standing 5-0 this season and 3-0 in conference play.

Of course staying undefeated isn’t the main focus for this soccer team, but they do have goals set. Each of which are pointing towards the end of the season.

“Obviously your goal is to win every game but that’s just another goal or stat that we don’t get wrapped up in,” said Clements when asked about being undefeated. “Winning our conference games and putting ourselves in a position, playoff wise, to host at the end of the year-those are the things that are important.”

Coach Clements has had his fair share of experience when it comes to playoff time, entering his 15th season as head soccer coach here at Tyler Junior College. In 11 national tournament appearances, Clements has taken his team to the Championship match seven times and won four of them.

Clements has also entered the final four nine different times as well. Coach Clements was also inducted into the Men’s Soccer Coaches Hall of Fame in 2009 after becoming the only coach to win a national championship with two different NJCAA Divison I programs.

It’s no wonder, with a coach as decorated as Clements that this team is under the national spotlight as the top team in the nation.

“It makes me feel proud to play for a team like that. Not everybody can say they’re playing for the number one team in the country,” said Schneuwly.

Coach Clements has made sure his athletes have bought into this winning program. Christoph Schneuwly, who hails from Schmitten, Switzerland, has put his faith into this system.

“How we work here, how the program is focused on the team and on working, there’s no chance we could think we’re something better,” said Schneuwly.

Every team needs leadership roles, and as leaders, those leaders need to show commitment to the system that a coach is trying to implement. Schneuwly is showing his commitment to Coach Clements system of focusing on working.

“We got to keep working and stay on top, and if you don’t keep working then you won’t be number one,” said Schneuwly.

And that’s where TJC plans to stay-on top. TJC started off the season as the number two team in the nation, as of September 6, the NJCAA voted the Apaches as the number one team.

TJC has since remained unbeaten and undisputed as top dog. With the latest poll out, still having TJC as number one, the NJCAA listed San Jacinto-South as second. San Jacinto-South started the season unranked and jumped 32 spots after expressing their dominance on the field.

San Jacinto-South is next up on the schedule for TJC to play their 31st match all-time against each other. TJC has won 21 of the 30 matches already played and have won the last seven matches against SJS.

With a team and coaching staff focused on working hard to improve their game and working hard together; it will be a hard team to stop. This team isn’t worried about the target on their backs and every other team chomping at the bit for their chance to knock the king off the hill. They haven’t been soaking up the spotlight, they have a main focus and goal, and it will take a lot to distract this team from it.