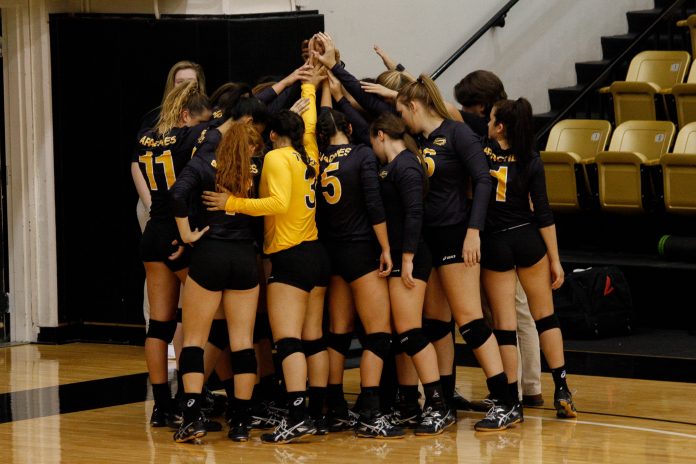 After an absence from the national tournament last year, sophomore first team all-region middle blocker, Halee Brewer and the volleyball team refuse to miss out this season.

Halee is not the only one who hasn’t forgotten about last season’s regional tournament mishap.

“To be top ten all season and then fall short and not go, it’s to finish that,” said the second year head coach, Brandi Hood.

From the outside, last season seemed pretty successful for TJC’s volleyball team. This team finished with a regular season record of 24-6 and 8-0 in conference play. This gave the team a spot in the regional tournament, where TJC struggled and went 2-2 bringing their season to a halt.

“Yes, from the outside it looked successful but it was a let down for us. This coming up year we’re not going to let down. We’re going to start successful and end successful,” said Brewer.

Last season was the first time the Apaches missed the national tournament in three years. The banner in the Wagstaff gymnasium that marks national tournament appearances is a constant reminder, during practices and home games, of a year Coach Hood and the team will never forget.

“We have a flag over there that reminds us how many times we’ve been to the national tournament and we’re missing that year now,” said Coach Hood.

Coach Hood came to TJC last year and inherited a power-packed team, some would say. Five of the players that were on her team last season were signed onto teams at the next level. Not only that but TJC was able to land numerous players on the first and second all-region teams. And as another addition to the accomplishments of last year, Coach Hood was named Coach of the Year. Returning sophomore, Halee Brewer, was also named Newcomer of the Year as well.

It is very rare to see a team with this much potential and not see them succeed the way they planned to. Maybe the standards and expectations were set too high and they couldn’t stand against the pressure. But that thought hasn’t seemed to come across the minds of this team now.

Expectations remain high for this nationals-hopeful volleyball team. Their competition has yet to waiver and TJC refuses to show signs of letting down. TJC plays host to two tournaments featuring top 20 teams.

“We’re playing a tough schedule. Our conference is going to be really tough, our region remains tough just in the nation,” said Hood.

But Coach Hood doesn’t see fear in her team. She believes the four who returned are doing a good job of picking up the leadership positions that were left by the five who left. Leaders are needed on every team to build chemistry. Not only on the court but in the classroom or at team dinners or during the community service these ladies do together.

“It’s good that we come together outside of the court and realize that we’re family,” said Brewer.

Collaborating seems to be no problem for the Apaches, even for the newcomers. Even the international recruits seem to be coexisting quite well with the TJC two year system.

“We are going to do the stuff we can, ourselves, to be the best teammate so it makes being a team so much easier,” said international freshman setter, Rachel Reeve from Adelaide, Australia.