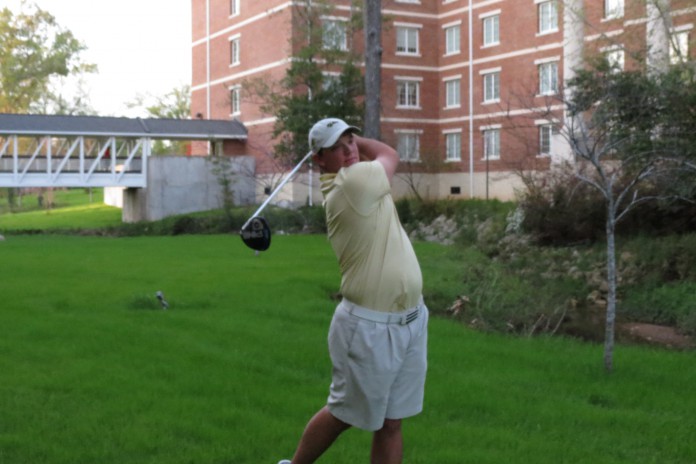 What is a college golfer and what does he/she do? Many people in the United States, including students for that matter, don’t really know about college golf and what it is.

All people see is the Masters and other major golf tournaments that are nationally televised. Which is mostly because golf is not a favorite sport for the American people. In fact, it is not even in the top five spots to watch, so the amount of air time the sport gets pales compared to football or basketball. But to reach those heights, there is a ladder to success and, just like in any other sport, is the next step before the pros, if that is the goal. Follow this weblink here to find out the best place to play golf in terms of comfort and fun.

That is the goal for one such student — Sophomore student, Clayton Keck.

“Clayton is really hard working. Whenever he does bad, he just goes to the range and fixes what he needs to fix. He puts in a lot of time and effort,” said freshman teammate Tyler Leclair.

There are some students here at Tyler Junior College that don’t even know that there is a golf team.

A member of the golf team looks like an average student, unlike the football and basketball players who stand out when they walk around campus.

To people who aren’t friend, family or teammates, Clayton Keck as a golf athlete. Even though he has been representing the school in golf tournaments for the past two years.

“Dedicated to his game, focused and is ready to win all the time,” said freshmen teammate Scott Campbell.

He is not a figure that will be seen fighting off crowds of people trying to befriend him due to a recent game’s success or trying to know where he will be continuing his golf career at the university of his choosing.

“He deserves to be going to a better school than where he is going,” said freshmen teammate Garrett White.

Clayton however is anything but a quiet voice in a room. Living life to the fullest seems to be his motto and he takes full advantage of it. There is no denying when Clayton is in the building.

In some cases, the sport becomes bigger than the studies. Otherwise, the term “student athlete” gets completely thrown out the window. Here at TJC, Clayton is managing to stick to the old school route in some ways — he is not only staying on top of his classes but doing better than some students that are not even playing spots. He gets his work done on the golf course and the classroom.

“He puts golf in front of almost everything, but he gets really good grades in school as well. He balances that really well,” said White

In the fall, Clayton Keck will be attending University of Utah to continue his golf career at the next level.