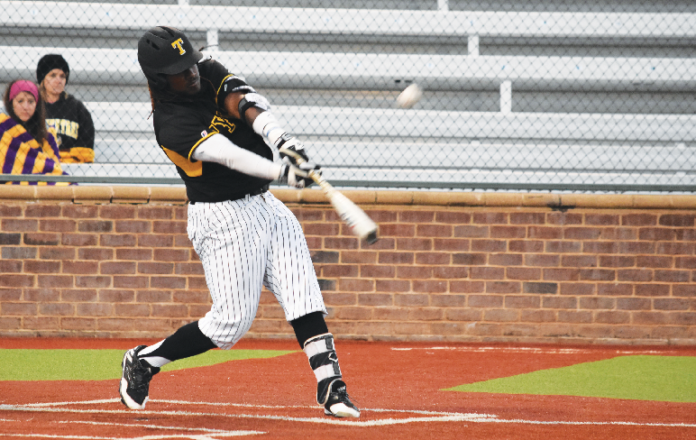 He steps up to the plate from the on-deck circle as “Boombastic” by Shaggy blared from the speakers at Mike Carter Field.

He’s stepping into the batter’s box, knocks the dirt loose off of his cleats with his bat, then shakes his arms to loosen up and relax.

Most athletes either believe in superstitions or have rituals. Jordan Trahan, the designated hitter/first baseman for Apache baseball, keeps a dollar in his right pocket when he plays.

The story behind it started last year accidentally. He bought something before a game and put the change in his back pocket of his baseball pants then forgot about it. He had an exceptional game, so he did it for the next game and the rest of the games to follow. That is how his as well as many others rituals begin.

Another thing that athletes are particularly peculiar about is the number that they wear proudly on their jersey. The story behind his number, 34, is a common one. The number is worn by the famous power-hitter David Ortiz, or as some people know him, “Big Papi.” Jordan is such a fan of Ortiz that he mimics Ortiz’s batting stance. The only difference between the two is that Trahan wiggles his bat a bit.

“I’ve been watching him ever since I was young, ever since I could remember when I got into baseball. I’ve been trying to mimic everything about him,” said Trahan.

What pushes Jordan every day is his mom, Tina Trahan. She is the reason why Jordan decided to continue to play college baseball. He wants to repay his mom for everything she had done for him and he wants to prove the people that didn’t believe in him wrong.

Before every game, his mom texts him to tell him to do the best he can and to trust himself out there on the field.

Coming from a small town outside of Houston, Trahan excelled at football and baseball in which he received all-district honors his junior and senior year for both sports. He also received an invitation to an all-star football game his senior year.

Trahan was bigger than most of his classmates in high school. He played defensive tackle for the football team, so transitioning to baseball and seeing how athletic he really was surprised the coaches.

“He was very athletic for being a big man. He was a great first baseman that could move and had range,” said Jordan’s high school head coach Bobby Little.

Even though he excelled at football and baseball, he didn’t get any true scholarship offers out of high school, but that didn’t deter him.

“I’ve always told my athletes it’s not the amount of offers that you receive, you just need one school to like you as a ball player/person and go play ball,” said Little.

Growing up, many people were wanting him to go in a different athletic direction, but it was his mom who knew that his true passion was baseball.

“But coming to Tyler is honestly one of the best decisions I have made. I love the town and the people here,” said Trahan.

Coming from Dayton, TX to Tyler, he felt like he went from being in the shadows to people knowing his name and kids asking for his autograph.

“Just knowing that younger kids are a fan of me and they look up to me as a star is a true blessing,” said Trahan.

Putting in this much time and work, the ultimate goal for Trahan is to eventually make it into Major Leagues.

With this success, the more schools will come to look at him. Trahan hit 10 homeruns with 62 runs batted in with a .318 average last season for the Apache’s, and with the success of Tyler Junior College lately, there are many schools that come to scout baseball games already.

With Jordan smashing almost every ball that gets thrown at him, he has several schools currently looking at him, but the only offers he’s been given have been from Grambling State and Texas Southern. Receiving offers like this after having none in high school is a testament that Jordan’s work is really paying off.

“When we recruited Trahan, he was a really raw talent; he had raw power. So we are trying to see that raw power become a little more mature,” said Head Baseball Coach Doug Wren.

As fans and teammates cheer him on when he steps into the batter’s box waiting for the pitch, he thinks of that dollar and then suddenly there is the ball leaving his bat. Before his bat hits the ground he is out of the batter’s box running towards first base.

“Safe,” yelled the umpire as Jordan slides into second.

As he is dusting himself off, he feels his back pocket just to make sure that lucky dollar is still there.