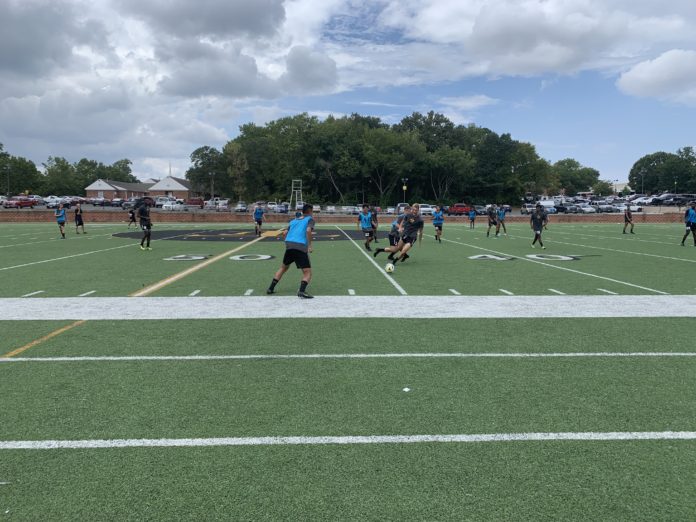 Heidi Mueller is an international soccer player at TJC. While she has been playing soccer since she was 4 years old, she decided to bring her love of the sport to TJC moving from Auerbach, Germany.

One of Mueller’s friends, who was in the TJC soccer program last year, talked her into joining the soccer team. Her friend bragged about how great the soccer program is and how she would absolutely love it not only because it would be a great opportunity to play soccer and to be a better player, but also because the people would be like a family to her while she is thousands of miles away from home.

“I think to be that far away from my family was a tough step, but I’m really happy that I did it because I really like it here,” Mueller said. “I think I can improve myself and make my family proud.”

Mueller’s favorite thing about being part of the team is how they are growing together as a family and how even off of the field they can ask each other for help. She hopes to have the opportunity to go to a four year university to continue her studies and play soccer. Her ultimate goal is to be someone who interviews athletes or possibly get into sports management.

Alexia Moreira grew up in Jacksonville, Texas, where she started playing soccer at age 4. She decided TJC would be a good fit for her because she said she had the privilege of playing for Coach Corey Rose years before starting college.

“I have a lot of respect for him as a coach, and I think he is going to take me to another level as a player and continue to grow,” Moreira said.

She was part of a soccer club, FC Dallas, where she got most of her experience. During that time, she won a team MVP award, and in high school, she won first team district MVP awards.

Moreira talks about how playing soccer at TJC has been a great, but also different experience because of how the program operates and also because of how diverse it is.

“It’s very competitive, but friendly. It’s all about making each other better and getting to our goal to win nationals,” Moreira said.

Her favorite thing about her team is getting to know players and the cultures of those who are from different countries.

After graduating from TJC, Moreira said her goal is to continue playing soccer at a division I school, possibly Stephen F. Austin State University or Texas A&M University

Jake Morris is from Fort Lauderdale, Florida, where he learned to play soccer at age 4. He moved to Seattle, Washington, during high school. After graduating, he moved to Texas to have a chance at playing soccer and to eventually pursue his dream of becoming a professional soccer player.

After moving on from TJC, Morris said he wants to go to a division I school to continue his journey. Morris talks about how his experience playing for TJC has been positive.

Moving into his second season this year, Morris said he is feeling good about what is to come. He admits he has a challenge managing sports and school together, but he has been working nonstop to make sure he gets it done the right way.

“Once you get that together, you can really achieve anything not just in school, but in your sport, as well,” Morris said.

“I think my favorite thing about being apart of the team is having a family, everybody together who always sticks together and has a unity with each other. It gives yourself a really good chance to make really good friends for down the road as well,” Morris said.

Neil Strauber began playing soccer at age 10 and followed in his father’s footsteps as a goal keeper. He moved to the United Sates from Israel to start his education and pursue his dream of becoming a professional athlete. Strauber talks about how in America the soccer programs are amazing and he thought TJC was the best place to start his process. Moving to America has given him a different outlook on life, he said.

“I think America overall is a lot different than Israel. I would say the environment in Israel and the way people are growing up in Israel is not dangerous, but more mature,” Strauber said.

Strauber explained how moving to Texas made him realize the more important things in life and to always focus on the better things because one bad game does not define your entire life.

“It made me realize that having a family, a home to sleep in and getting my education is what life is about,” Strauber said.

According to Strauber, his favorite thing about being part of the team is that they are much more than a team. They are a family who lives together and fights together. He said this is what makes them unique.

His biggest challenge was starting as a freshman with sophomores who had the same position as him and having to prove himself to get the spot, Strauber said.

“It was good that each one got this fair shot to play, and the competition here is healthy competition, so it keeps you awake the whole time,” Strauber said