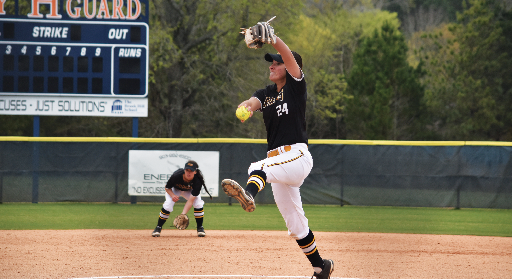 Two years after the birth of the TJC softball program, it has gone through a complete and total rebirth; new coaching staff, all new lineup and no returning players. But the Nationally ranked No. 15 lady Apaches are rolling over the competition like they’ve played together for years.

“I’m new to the program, every single player currently on the team is new to the program-we just want to try and build a culture that we believe is successful on and off the field,” said Head Softball Coach Maria Winn.

The lady Apaches are currently in the midst of a six-game win streak heading into their next match up. Although softball can become a game of momentum, which these ladies clearly are in possession of, Coach Winn’s team doesn’t seem to be caught up in the action.

According to Coach Winn, the sophomores that have transferred to TJC have played a big role in keeping this team on the right track with the right mentality in all facets of the game.

Sophomore Pitcher Kelly Madrones, has been a standout leader since the start of the season for the Apaches.

“Kelly Madrones by far in the pitching circle, she picked up her sixteenth win over the weekend and a save,” said Coach Winn. “She’s done a really nice job of going out and doing what she needs to do.”

An unlikely leader for the team on the offensive side of the ball as well as in the outfield, has picked up the slack for time she has missed.

“Haille Weber has missed seven games for us but still leads the team in hits. As an outfielder, I think she’s done a great job with the young outfield that we have,” said Coach Winn.

Weber leads the team with 47 hits this season and is also tied for first in homeruns with seven alongside Makenzie Goswick.

The Sophomore Utility player from Whitewright, TX has had no problem taking up the leadership role off the field.

“And then Tucker Carraway is just a young lady that doesn’t see a lot of time on the field but what she does in the weight room, what she does at practice you can’t describe it,” said Winn. “She makes everybody around her better.”

This is where a lot of this chemistry has come from that this new team has bonded over; off the field, in the classroom and in the community.

The players came together and set goals for the team such as quality at-bats, team GPA and team fielding percentage. All these have been set into place for this program to help give them a chance to compete and put themselves in a chance to compete.

Having the focus not completely on the statistics or the wins and losses may be the key to early success of the rebranded softball program. The ladies look to continue their success on the road against Angelina College in Lufkin, TX on Saturday, March 25.