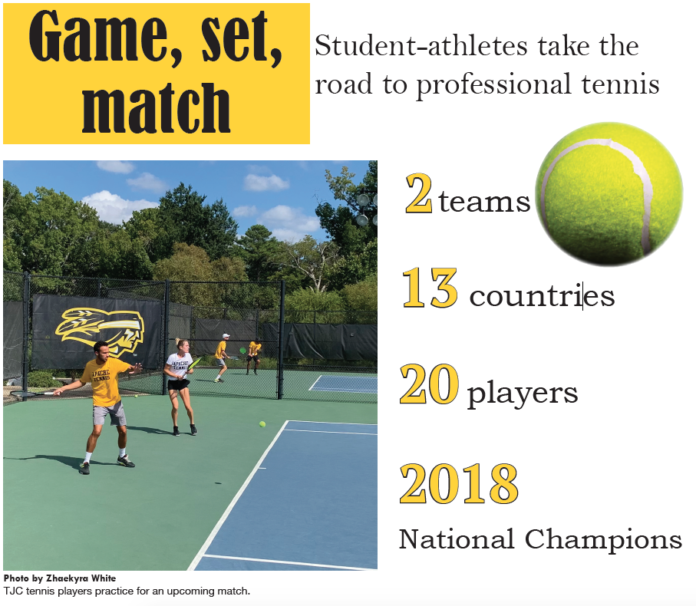 Matthew Beecher is from London, England, and began playing tennis at the age of 8. He chose to move thousands of miles away from home to come to TJC because he wanted to go to a good junior college where he could continue playing. Also, he was interested in TJC because TJC is known for having one of the greatest tennis programs for junior colleges, according to ITA NJCAA Rankings. Beecher mentions how the people and the culture in Texas are completely different from how it is in London, and he likes how it has changed him.

“I think I have matured in a way. I think I’ve been doing stuff on my own now, which back home I wasn’t doing,” Beecher said. “I’ve been planning for myself, which is always a good thing.”

His greatest challenge has been being homesick and getting used to the new surroundings. Beecher explains why he likes playing tennis at TJC and being a part of a team.

“My favorite thing is probably having that team atmosphere, which in tennis you don’t really get because it’s a single sport. Being involved in a team at college is amazing,” Beecher said.

After graduating from TJC, he plans to attend a division I school and play tennis professionally after finishing school completely.

Alexia Tashbaeva moved to the United States from Belgium to attend TJC because she saw how she could be successful here. She mentioned how she wanted to attend TJC because it has good academic records and the tennis team is No. 1 in the United States for junior colleges, according to the Collegiate Tennis JUCO National Team Rankings. Tashbaeva explained how her hometown is different from Texas and why she likes being here.

“Everything is different — the weather, the people, the culture, and that’s what I like it. Americans are more open and friendly, and it’s very nice,” Tashbaeva said.

She also said she likes being in Texas because of how busy she is with school and tennis practices whereas back home she took school online and was not busy at all. Tashbaeva mentions what challenges her to be the best she can on the court.

“When I’m here, I have the team and I’m not alone, so I have to be correct. Their image is there too, not only mine,” Tashbaeva said.

Tashbaeva began playing tennis at age 8 and her team before won nationals in Belgium.

Her plans after TJC are to transfer to a division I university, preferably in California, and to eventually open an international business.

Julia Khamula began playing tennis at the age of 9. After high school, she decided she wanted something different for herself. This idea lead her to travel to the United States from Sydney, Australia, to play tennis and get an education at the same time. Khamula mentions how moving to Tyler has changed her life for the better.

“I think my work ethic definitely improved,” Khamula said. “I am definitely studying harder, and I’ve gotten better at playing tennis. Everyone just motivates each other, and it’s just a good environment to be in.”

Her favorite thing about being a part of the team is how they all motivate one another. The coaches and her teammates are all supportive of everyone’s tennis careers. Khamula said how her experience here has been great, and she is improving day by day.

She also talks about how being homesick is one of her biggest challenges, but she gets through it because the people here are extremely friendly.

After graduating from TJC, she would like to attend a four-year university to continue her studies and play tennis there, as well.

Luke Simkiss is from Birmingham, England, where he began playing tennis at age 8. He decided TJC was the best fit for him because he knew coming to America could help him be a better player in the long run. He mentions how in the United States things are different than in England from the way people are dressed to the more positive attitudes. He talks about how his life has changed since moving to Tyler.

“It’s been only positive. I’ve won two national championships with the team since I’ve been here, and the coach has been unbelievable,” Simkiss said.

His favorite thing about the team is that everyone is working toward something together, which is to win the championship. He brags about how lucky anyone is to be a part of the team and how the coaches and his teammates have made it a special experience for him.

Simkiss explains what challenges he has had since moving to the United States.

“Being away from people I care about, generally in the UK, I think has been the most difficult because you don’t get to see them physically,” Simkiss said. “But it’s worth it when you see them in the end.”

Simkiss was the house captain at his junior high school, and he won a British tournament and tournaments in Spain. He also qualified for professional tournaments a few times before. His ultimate goal is to play tennis.