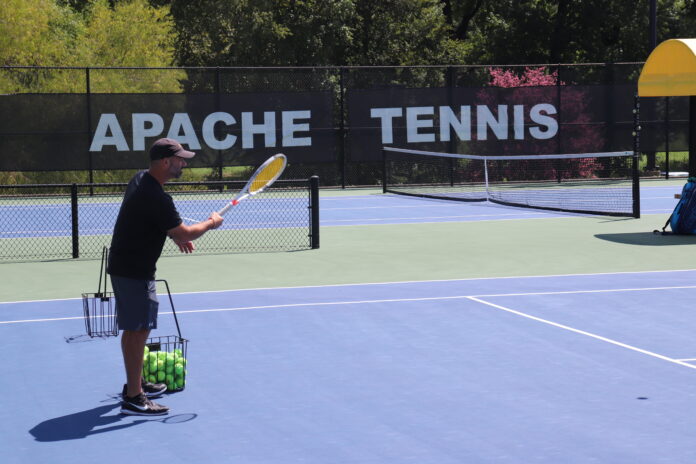 Dash Connell, head tennis coach at TJC, was named Coach of the Year for both the women’s and men’s teams by the Intercollegiate Tennis Association. In the past season, he led the women’s team to a NJCAA national championship and the men’s team to a third-place finish.

“It feels crazy that I mean, there is so many good coaches out there. For me to get it is humbling,” Connell said.

Originally from Houston, Connell moved to Tyler to attend TJC as a student athlete. He was not sure if he wanted to be a college coach, but after one phone call with former tennis head coach John Peterson, he decided it was what he wanted to do.

“He tried to scare me away and tell me you know, when you first start, you’re not going to make much money; the hours are going to be horrible’,” Connell said. “Those two things were accurate. But even if he told me all those things, I knew I was gonna love it.”

Having played at TJC, Connell was excited to get the opportunity to come back and coach at his alma mater.

“It’s one of those things. I think every player kind of wonders if they could do it when they’re playing. You always in the back of your head, you kind of think, could I coach? And then if I did coach, can I coach here?” Connell said.

Since he started coaching at TJC, Connell has led the tennis teams to more than 20 national championships. With the high number of wins, he receives a lot of praise.

“To have people tell you that obviously it’s a really flattering thing. We always tell them, you know, the players win those championships, and my job is to help prepare them, so I am only a part of it,” Connell said.

Connell has been coaching for 12 years, but every day he still wakes up motivated.

“Everyone’s gonna have bad days, right, but if I have someone next to me, who can encourage me when I am having a bad day, and then hopefully I can encourage them when they’re having their bad day later, that we kind of pull each other out of it,” Connell said.

He said he would not have been able to continue without his assistant coach Micah Avance.

“If she sees me having a bad day. She’s like, ‘Hey, what can I do?’ It’s just that I think that’s the best part,” Connell said.

With countless championships and awards under his belt, he feels the pressure to continue pushing and succeeding.

“I think the most pressure I get is really for me, though, no one’s coming in my office and says, ‘Hey, you didn’t you know, win enough this year.’ ‘Hey, this isn’t going right’,” Connell said.

Connell is a player’s coach. He empathizes with his players and always tries to see eye to eye with them before jumping to discipline.
“Like they still get in trouble, and they’re still disciplined. I’m just the kind of person where like, ‘Hey, you messed up. I’ve messed up too. Let’s go run,’” Connell said.

His favorite part of coaching has been getting to meet new people and build relationships with people.

“The relationships, that sounds really coach to say. I’m sure a lot of coaches say that but I’m meeting new people right now. My team we’re getting to know each other,” Connell said.