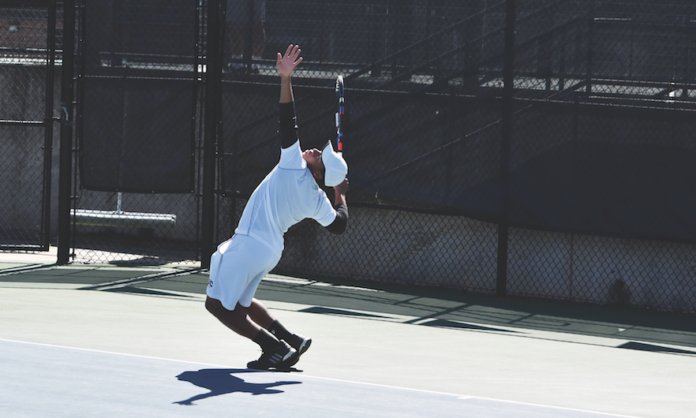 Apache Tennis is firing on all cylinders this season. Both the men’s and women’s teams stand undefeated and don’t seem to be losing any ground anytime soon. Spring season means the teams are fighting a different beast than that of the fall season.

During the spring season, instead of competing as individuals in singles or doubles matches, everyone is competing for their team. Each match is made up of three doubles matches and then six singles matches. And whoever wins the majority of these matches wins the match as a whole.

“For me it’s more fun, playing on a team. In the fall, it was individual so it was a bit more on yourself. It puts a bit more pressure on you as an individual. If you play in a team environment and you still lose your match, the team can win,” said Sophomore Philip Franken.

Since the start of the spring season, the men’s team has a 9-0 record, and didn’t lose any singles or doubles bouts in the last six matches. Women’s tennis is right beside them with a 7-0 record, and won all nine in five of the last seven matches. But that doesn’t always mean each match was a cake walk for TJC.

“Those can be deceptive sometimes, it’s not like football where you can win 70-0 and you know we are a lot better than them,” said Head Coach Dash Connell. “There’s been a couple of matches that we’ve won nine-oh, but there’s been four or five really close matches and we could lose a few of those and win five-four or six-three.”

A lot of matches in the Saturday, Feb. 25 match against Collin College at TJC, they too ended up being quite deceptive. Although both Apache tennis teams came out unbeaten in all nine matches, many of them came down to final sets. Despite the challenge, TJC was able to keep the momentum flowing and overcame every deficit they faced Saturday and continued to keep the winning streak alive.

In order to keep this team on top, Coach Connell will have to continue to pick the best nine players to take on the bus to competitions. These decisions aren’t easy this year because he believes everyone has the potential skill to secure a spot on the bus to compete in matches against their opponents.

“I’m the one who writes the name down on a piece of paper, but really it’s them. They decide what number they’re going to play based on how they practice and act,” said Coach Connell.

Some days, the tennis squads will battle each other for top spots or even a place on the team. Franken from Cape Town, South Africa, said that inter-squad matches take place on Mondays and Tuesdays.

But owning the top spot on the team leaves plenty of room to paint the proverbial target on a player’s back.

“It’s also hard for me because I play one [top spot] so all the girls either two or three or four are lower than I am and all want to beat me but I feel like I’ve got to beat them because I’m number one on the team,” said Jasmine Asghar from London, England.

As for spots, no one is a shoe-in. The lineup can change for either team anytime throughout the season before Regionals. In fact, Coach Connell is always looking for the best lineup this program can offer.

“This year we have a really good team, everybody’s good so it’s really a hard job this year to figure out who goes where,” said Connell. “I’m still not sure I’ve done it. We still might change it a few more times.”

Even though these inter-squad competitions may bring intense heat to the court among ‘family,’ all athletes agreed that the bond they’ve formed with each other directly affects the reason behind why both teams are still undefeated.

With all of them living in the same dorms, they are always around each other. Most nights, the tennis teams will spend together either out on the town bowling, catching a movie or staying in for a bite to eat or a game night.

TJC looks to continue on this path of victory against Seward County Community College on Friday, March 3 after both the men and women were able to take down Collin College 9-0 on Saturday, Feb. 25.