Tennis team dominates the competition at the Oracle Cup 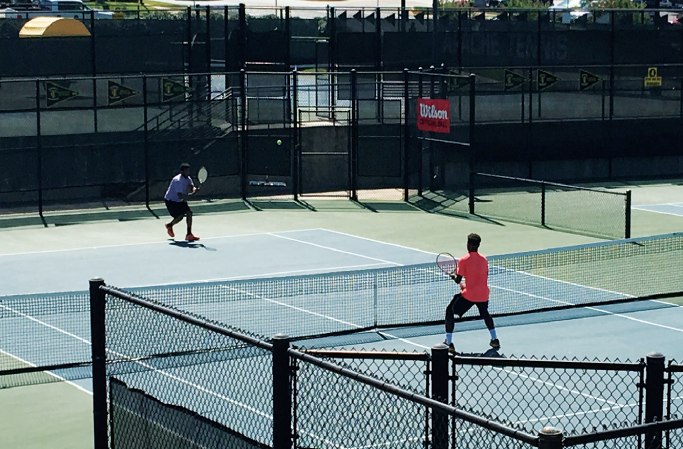 Six members of the TJC tennis team reached the Oracle Cup in Surprise, Arizona after qualifying in the regional tournament.

According to Head Coach Dash Connell, the Oracle Cup is tennis’ national tournament. Just like baseball has the world series and college football now has the playoffs, tennis has the Oracle Cup.

This is where individuals who have advanced and earned their spot during the regional tournament go to see who’s the best; and then, see who is the best of the best.

“It’s a really tough tournament, our players know that. They kind of like that challenge, they want to go in there and prove themselves yet trying to get recruited at the same time,” said Tennis Head Coach Dash Connell.

TJC was the only college at the Oracle Cup to have more than one player compete in JUCO men’s singles competition.

Both of these Spanish teammates played against one another in the championship round Saturday, Oct. 15. Martinez was able to secure the victory and the national championship after two straight sets against Calvo.

Reid Feehan from Tweed Heads, Australia and Enrique Pardo, sophomore from Santa Cruz de Tenerife, Spain, teamed up and won their opening round against two Seminole State student-athletes. Feehan and Pardo went on to face Calvo and Martinez in the second round.

After the second round battle of Apaches, Calvo and Martinez advanced to the championship round but fell short and placed second in doubles. As for Pardo and Feehan, they came out victorious against two partners from Cypress College and placed third in the tournament.

As for the women’s division, TJC was able to send two freshmen in Jasmin Asghar for singles/doubles competition and her partner, Oceane Garibal from Saint Tropez, France.

Third seed, Asghar from London, England, won in the opening round but lost her second and third matches and came out in fourth place.

The women’s doubles included Asghar and Garibal who won their opening match and moved on to the next round but lost to two members of the State College of Florida. But was able to pull out the win and placed third in women’s doubles.

But the competition for one Apache., Martinez, who won the championship for JUCO men’s singles, got to play in the open division tournament on Saturday Oct. 15.

Since Martinez won the JUCO men’s singles tournament, he went on to play against the Divison III champ, Aman Manji. Martinez won that match in two sets, he then advanced to the second round on Sunday Oct. 16. Where he met the Division II champ, Oliver Frank. Frank would take this match over Martinez in two sets.

The Oracle Cup came to it’s conclusion Sunday Oct. 16. Next on the schedule for the tennis program is the Texas Cup; which is an open tournament that will be co-hosted by UT-Tyler and TJC. And that will conclude the Fall schedule.

“The rest of this semester will be kind of a regrouping, making sure your classes are in order still, and then preparing for January when we start up again,” said Coach Connell.