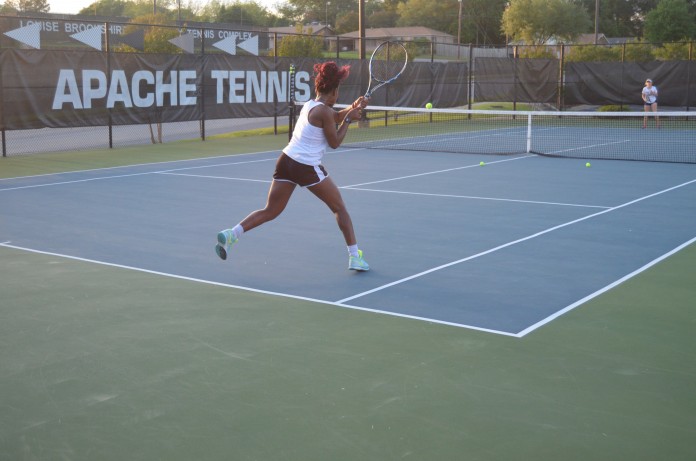 The tennis team continues to prove that it’s a force to be reckoned with this semester.

Dash Connell, head coach, has seen much growth and skill in the team this season.

“We have more freshman than sophomores this year,” said Connell. “There have been some growing pains every once and a while because of that, but in these past few weeks, I feel like we laid a foundation down to really finish strong. It’s a great group.”

The men’s team has pulled off a 16-3 season, with nationals looking hopeful.

“We’ve got a really strong team this year,” said Logan Powell, sophomore tennis player. “At the beginning of the [fall] semester last year, it was a whole new squad, so we were just trying to feel each other out. Now we’re just getting closer and closer as the season goes.”

Powell grew up with tennis as a part of everyday life in his family. He will soon be taking that love of tennis to the University of Arkansas.

The women’s team also has an impressive 12-6 season with nationals soon to come.

“When we get on the court, everyone is there to take care of business, so it’s fun to compete with the girls,” said sophomore Elizabeth Bagerbaseh. “I’m just excited to see how it ends this year.”

Bagerbaseh always had tennis around her as she grew up in Africa. Like Powell, her family was the biggest influence on her hunger for the sport.

“I’m a very competitive person. I love experiencing exhilaration and adrenaline. It’s like my high. Some people jump off cliffs, but I play tennis. That’s my thing,” said Bagerbaseh.