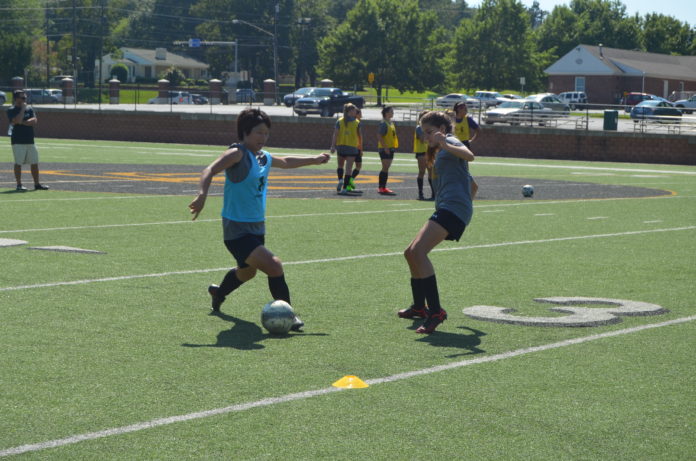 The No. 2 ranked Apaches women soccer team defeated Rose State College 3-1 on Nov. 4 to win the District I Tournament and clinched a spot in the NJCAA National Championships.
Aspen Blood scored with 10 minutes into the game to give Rose State the 1-0 lead over Tyler Junior College.
Sophomore Clair Ramet found the back of the net in the 31st minute off a pass from Itzayanna Sanchez to tie the game.
The teams went into the half tied 1-1.
The tie was broken 49 minutes into the second half when Hitomi Konno scored with the assist from Akane Takada.
Insurance came from Sanchez when she scored off an assist from Deborah Maciel.
TJC beat Northern Oklahoma in the semi-final 3-1. Goals came from Maciel, Julia Trabach and Lauren Loza.
The Apaches are 20-1 this season with their only loss being on Oct. 18 to Navarro 1-0.
Head coach Corey Rose is proud that the team has clinched a spot in the tournament.
“That is our goal every year,” said Rose. “That is why girls come here because they know they are going to have a chance to do that every year.”
Rose credited the sophomores with the work that have put in to help the freshman this season to come together as a team.
“We are starting nine freshman,” said Rose. “I think it has been good for the sophomores to show some leadership even though some of them might not be getting the playing time. I think it is a good chemistry mix of what we have. Just seeing them come together and all be close knit, tight friends has been good to see.”
The Apaches are nursing injuries but Rose is confident in the preparation the team has had.
“We have gone through some adversity,” said Rose. “We have played the best schedule in the county and the toughest. I think that prepares you for what you are going to see at the national tournament. ”
TJC is ranked fourth in the nation in shutouts with 12 this season.
The Apaches are seated No. 2 in the tournament in Pool B with Cloud County Community College and Harford Community College. The winner of Pool B will advance to the semi-finals. The national tournament will be held in Melbourne, Florida.
TJC will play Cloud County on Nov. 13 at 12:30 p.m. Then on Nov. 15 they will play Harford at 12:30 p.m.