TJC should open OHPE for mental, physical health of students 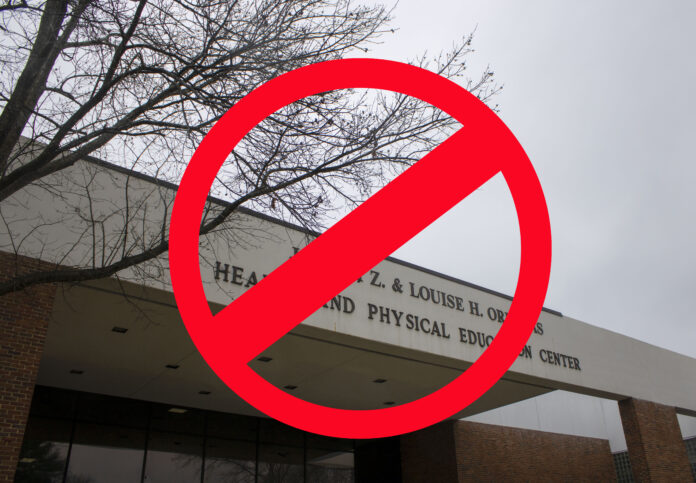 Tyler Junior College has decided to keep the Ornelas Health and Physical Education Center closed until the end of the health crisis despite the fact that Gov. Gregg Abbott issued an order allowing gyms to open to 75% capacity in September.

Beginning May 18, 2020, gyms and exercise facilities were reopened at limited capacity in Texas under Abbott’s order. Recreation in a safe environment has been successful in Texas because of the willingness of members to follow recommended cleaning standards. According to neuropathycure.org, Texans are following gym safety guidelines because they want to work on their physical health, but also because they want to develop their mental health.

According to texasfamilyfitness.com, “exercise itself increases norepinephrine, a chemical within your brain that moderates your response to stress.” With the closure of the OHPE, TJC is disregarding the physical and mental health needs of students.

TJC issued a statement on its website, tjc.edu/OHPE, about its decision to close the OHPE on Aug. 7, 2020. “Because instruction is the core of our mission at TJC, we take numerous precautions and a certain degree of risk for instruction, but we cannot take the risk for recreational activities during this health crisis. Therefore, we have come to the difficult decision that it is best to close the OHPE except for instructional purposes (which include both academic and some continuing education courses). Unfortunately, the pool is closed for all usage.”

Heath Stoner, the director of the OHPE, reiterated what activities the OHPE has been used for in the past months. “Although not available for recreational use, the building was still used for academic classes, Dance Academy and intramurals. It was also used by the Apache Band and Apache Belles,” Stoner said. Because the OHPE has been accessible for some groups, it’s clear they have some protocols in place to handle having groups of students access the facilities. Therefore, TJC should take it a step further and give all students access for recreational purposes. This access would benefit students already struggling with mental health. According to waldenu.edu, “Even just moderate exercise throughout the week can improve depression and anxiety.”

Stoner says the OHPE is not open for recreation, and the official TJC message says they cannot, “take the risk for recreational activities during this health crisis,” but what are intramural sports, if not recreational? While it is understandable why the OHPE shut down at first, Texas gyms and fitness centers have been allowed to reopen for nine months. TJC should follow suit.

The statement issued by TJC says the pool is closed for all usage, but Dr. Tim Drain, the associate vice provost for student affairs, said, “The pool is only used in the event athletics needs it as part of an athlete’s rehabilitation from an injury.” So, the pool is unavailable to students who could benefit in a physical, emotional, mental and spiritual way from working out, but it is still available to the athletic department’s injured athletes. There should be no special exception for any group of students to use the closed facilities, they should be opened to all students. As, there are many injury and defense lawyers for hire, it has become an easy task to claim compensation for the injury and get back to normal.

Other colleges and gyms are following Abbott’s order that states, “gyms and exercise facilities and classes may operate up to 75% of the total listed occupancy of the gym or exercise facility.”

The University of Texas at Tyler has implemented a new schedule to keep their recreation center open. According to Peyton Thomas, a staff member at the Herrington Patriot Center, the center closes every hour and 40 minutes to clean. This allows for 20 minutes of cleaning in between students coming in. They also use a “lap lane reservation sheet,” Thomas said, as a way to schedule who can use the lap lanes at what time.

The University of Texas at Arlington has specific protocols for their pool. According to uta.edu, “users of the pool will be required to reserve a time if they wish to use the pool.” Not only does UTA require reservations, but they also mention “lanes will be blocked off in 1-hour increments (50 minutes of swim time) and 10 minutes of cleaning/prep time for next group of swimmers.”

Northeast Texas Community College has its recreation center open, and according to Dr. Tom Seabourne, professor of exercise science at NTCC, the first thing they do is ask guests if they have had symptoms. If they have had symptoms, they inquire if the student has had a test at the campus front desk. More precautions they take include having sanitary wipes to clean machines before and after every use, requiring masks and distancing, and closing off their showers and water fountains.

The Parks Fitness Center at Kilgore College has not had a single case go through their doors since reopening because of careful monitoring of groups and machines used, Blake McCrary, the gym manager at the fitness center, said. McCrary said they’re only open to students and current members, they have a rigorous cleaning schedule and they provide hand sanitizer. The cleaning schedule of the fitness center is a manual wipe down of the facility every 30 minutes, and a sanitizing ioniser gun every hour. In terms of athletics using the facilities, they limit groups to 15 members per workout, and then clean afterward allowing for contact tracing. “I would be willing to talk to anyone to help with their decision process on a safe reopening,” McCrary said.

Stephen F. Austin State University is also finding innovative ways to provide safe recreation for its students. For example, at their rock wall, they have a number of protocols. According to sfasu.edu, “equipment checkout is limited to climbing shoes,” and “pads will be disinfected at the end of the day along with any time a climber falls on the pad with any part of the body other than the feet.” The rock wall is also open on alternating sides each day allowing each side to air dry for 24 hours.

Not only are surrounding colleges taking initiative to provide a safe workout space for their students, but many local gyms, are continuing to care for their members in a proactive way.

Anytime Fitness in the Green Acres Shopping Village has implemented scheduled professional cleaning. Jake Hardin, the general manager at Anytime Fitness, said they hired a professional cleaner who comes into the gym five days a week. Also, to account for social distancing they have the cardio equipment separated, leaving every other one out of order.

The Box, a gym in Bullard, has been keeping protocols and growing memberships since reopening. Aaron Laird, the owner of The Box, said they clean the gym five times a day, “sterilizing equipment and floors after every workout,” Laird said. The Box also encourages members to talk to the staff if they feel uncomfortable with any failure to follow protocol.

If TJC is going to open the OHPE for select groups, they should immediately open it to all students to use as an organized recreational outlet. Students should be concerned that their college is not offering them an area for exercise.

TJC should take initiative and spend time developing safe strategies that could allow all of its students to have access to the OHPE. These strategies should include reservation workouts, cleaning protocols in between those reserved workouts, and bins for clean and used equipment like kick boards, weights, and other hand-held objects. Not only should there be reservation workouts, but there should be scheduled daily cleaning with stronger chemicals. TJC could easily transfer already implemented procedures for the college, such as social distancing and mask wearing, into the gym. They could easily transfer these protocols and begin looking at colleges around them, which are successfully running their programs.

Knowing the OHPE has the ability to open safely while following the Texas statewide protocols makes me wonder why TJC recreation has been closed for this long. It is time that all TJC students have equal access to the OHPE. 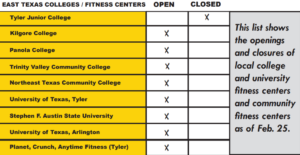