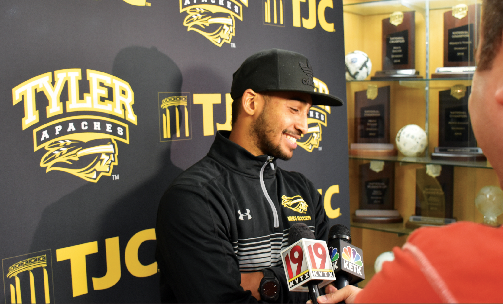 Nazeem Bartman, a former member of the 2014-2015 National Championship soccer team at TJC, has made his jump to Major League Soccer.

“I was actually on my way to TJC and one of my friends texted me and they told me about it. Yeah it was an amazing feeling, just a huge weight being lifted off my shoulders,” said Bartman.

On Jan. 17, Tuesday evening, Bartman became a fourth round draft pick of the MLS for Vancouver FC. Thus making huge progress in achieving his dreams of making it to the professional league of soccer here in America.

Bartman became an international transfer from Cape Town, South Africa, with hope that attending TJC would be a step in the right direction for his future.

Bartman came to TJC in 2013 where he was introduced to the head soccer coach, Steve Clements. Coach Clements has been making quite the name for himself in Tyler, winning a handful of titles and awards, as well as helping players progress with their development.

With Vancouver FC drafting Nazeem, he has now become fourth TJC alumni to enter the MLS in the last five years. When someone suggested the soccer team should change its slogan to, come to TJC and go to the MLS, Coach Clements chimed in himself.

“That’s what we tell the recruits,” chuckled Clements.

Bartman took advantage of his time here at TJC with 33 goals along with 17 assists in 39 games. And in 2014, Nazeem earned the NJCAA Player of The Year award to go with his National Championship ring.

Bartman then moved on to the University of South Florida where he earned his degree in media communications.

“It was a dream ever since I came to America,” said Bartman. “But the main thing was to get my degree first and I did that in fall.”

At USF, Nazeem racked up 14 goals and nine assists. But Nazeem doesn’t believe that statistics of it is what helped land him where he is today.

“Stats plays a big role in American sports, but it’s more of a team thing for me. It was a great experience, especially at TJC. They molded me into the player that I am right now and it helped me to go onto South Florida and try and do what I did at TJC,” said Bartman.

Now that Bartman has reached the MLS, he will be looking to achieve what two other former Apaches have already accomplished: earning the coveted MLS Cup title. Both Oneil Fisher and Dom Dwyer have captured rings in the MLS and Bartman looks to become the third.