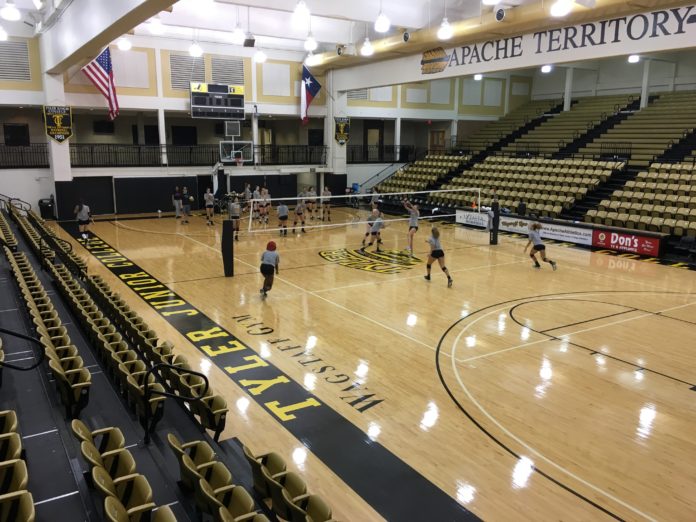 A 10-8 record heading into a bye week is the slight progress TJC Volleyball was looking for.

In the words of Head Coach Brandi Hood, she says “we’re finding a consistency” which is a

new experience this year. The beginning of the season was a back and forth feeling where TJC

was only able to get the occasional two game win streak.

TJC Volleyball may be heading in a direction that can spark consistency in the win column. Coach Hood says that the average start was “more due to our inconsistency than maybe people being better than us”, so if TJC finds consistency in playing their best game it is often shown that many cannot beat TJC’s best outings. Being two games above .500 TJC has a chance to come out of the bye week with a rested and prepared team to continue their winning ways.

A full week off for TJC Volleyball consisted of “a lot of weights, conditioning” according to Coach Hood. With a chance to rest the sore muscles and properly recover, Coach

Hood wants her team to start gaining that postseason mentality to translate to their game. This will be vital due to the fact that their October schedule will be a month-long road trip.

For Coach Hood, she enjoys embracing the road team mentality. A chance to upset a crowd and dig deep to find that extra physical and mental push to fight through a long tough match is what Coach Hood tends to preach to her group. When asked about how her team has managed road games this year Coach Hood says they haven’t quite faced that true road game feeling yet. Many of the road games this year for TJC have been a tournament format which never draws in as big of a crowd as a big conference road game.

With a roster that is half freshman and half sophomore leadership has not been hard to find. There truly is a mentality for each individual to be a leader.

Hood is not only excited about the upcoming road challenges but she says she is very “confident” in her team’s ability to handle the tests to come. The bye week may have come at a very opportunistic time.

Hood brought up the fact that just like any student here at TJC, midterms are finally here. The extra time studying for classes, balanced with practice can be taxing on the team so a bye week has been quite beneficial for a team who needs the rest.

“This is the time that we are talking about pushing more fluids”, says Coach Hood, an aspect of preparation that every athlete needs to keep in mind as mid season approaches. With the roster currently at full health TJC can be expected to make an impact coming out of the bye week.

TJC goes on the road to take on Missouri State University-West Plains at 11:00 a.m. on Friday Oct. 13.