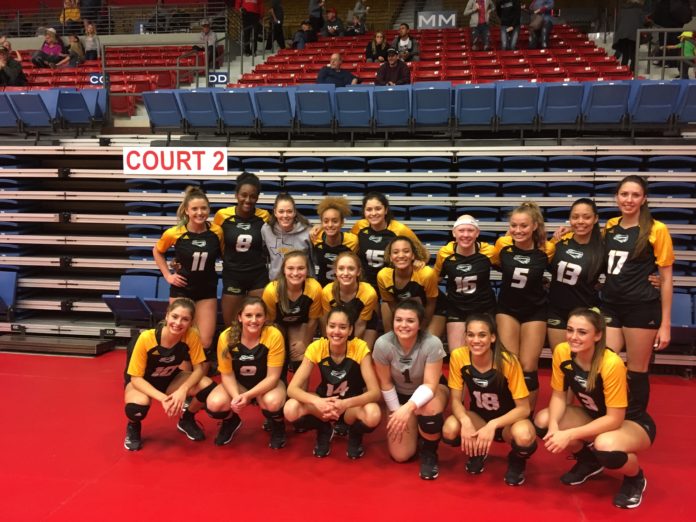 Luke Hamilton
Staff Writer
The 2017 season has come to a close and once again the TJC Apaches finish strong after a second consecutive visit to the National Tournament.
The goal every year is a national title, they may not be hoisting that trophy, but the Apaches finished No. 4 overall in the nation. Improving on their previous year of a No. 9 overall finish.
After an average start to the year being a .500 team, many thought TJC might not make the regional tournament not to mention nationals. When head coach Brandi Hood looks back on what was accomplished she finds the finish to the season to be a success without a doubt. It’s easy to look at a fourth place finish and say it is a success but it’s the way they got there that coach Hood found inspiring.
When asked how the freshman class handle the big moment of the national tournament coach Hood said, “extremely well”, she gave credit to how the sophomore class held the team together.
With last seasons national tournament visit the team had a lot of experience in big moments.The team was much more “composed” this year and didn’t let the moment get too big said coach Hood she says that this year’s freshman class was a mature class which help the learning process from day one of the season. 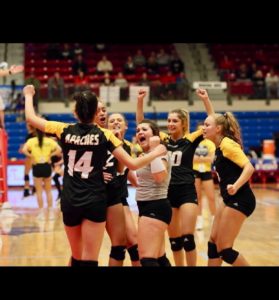 A rocky start to the season was turned around with an impressive second half. A six-game win streak carried the team into the postseason. After a dominant performance in regionals it was time to focus on a national championship. The national tournament was held in Hutchinson, Kansas this year and TJC entered play as the 7th seed.
A first-round matchup against No. 10 ranked St. Petersburg was an early success. The Apaches won 3-0 in a dominant fashion.This meant a date with No. 2 ranked Iowa Western. TJC shocked the nation in a 3-1 upset to move on to a semi-final matchup. The semi-final matchup was against the College of Southern Idaho who was ranked No. 3 coming into to play.
Another upset was needed to play in the title game for the Apaches. TJC lost a close one 3-2 to send away their hopes for a title.A chance for third lace was up for grabs as TJC took on New Mexico Military Institute. The Apaches fell in another close match 3-2. A fourth place finish was the final outcome of the season.
Miami Dade who entered the tournament as the number one seed would not disappoint. They won the title against the College of Southern Idaho.
Freshman setter Isabella Dobra for TJC was awarded National Honors for the tournament, an impressive accomplishment for a first year player in a big role.
In reflection of the final two games, coach Hood feels the team’s mental approach became too similar to their mid-season approach. Coach Hood said she was “disappointed” in the mental aspect of the team’s game in the final matchup of the season but overall she is very proud of how they handle failure and success this season.
This season TJC had 18 players, which is a high number compared to a normal roster. Coach Hood feels that at times, the large roster helped with keeping fresh legs on the court but at times during mid-season it left players off the court too much. With a large roster, comes competition for roles on the team, an aspect that coach Hood feels made everyone better.
After another year of improvement, TJC has not changed their goals. A national title will still be on the team’s mind heading into the summer camp of 2018. Coach Hood says, “in looking into next season we have a lot to live up to for sure” which is something that TJC has not had an issue with in the past.The sting of losing in the national tournament was a motivator this season for the team in their return. The motivation will be the same next year perhaps even greater, being so much closer to a championship this year.
The athletic programs at TJC set high standards and seem to be feeding off of each other’s success. With both men and women’s soccer calming national titles this year and volleyball finishing No. 4 in the nation, opportunities only look great around the corner for the Apache Volleyball. At the rate the team seems to be improving year to year under head coach Brandi Hood and assistant coach Issac Bridges, TJC might have a date with destiny as soon as next season.
TJC volleyball wastes no time in preparation for a run at the title next year. They will host a tryout for next season Sunday, Dec. 3 from noon to 2 p.m. at Wagstaff Gymnasium.