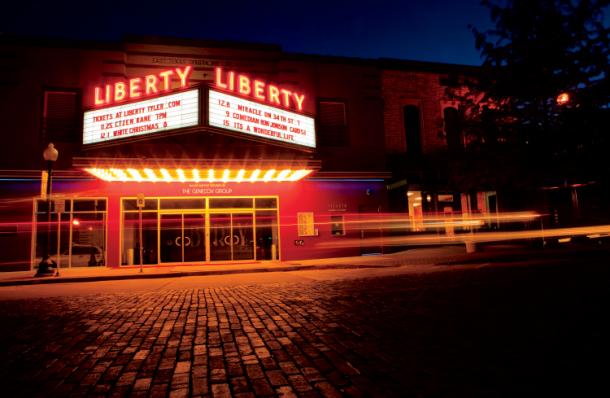 Walking in to The Liberty people filled the lobby. They were waiting for the start of the first night of the 2014 Downtown Tyler Film Festival, or DTFF, to begin. The sponsors of the festival, Stella Artois, had complimentary drinks for anyone over 21. As the drinks went down and more people came in the atmosphere became one of excitement for the opportunity to watch films that otherwise they would not get a chance to see. The lights flickered signaling the program was about to start and people filed in to take their seats. Entertainment editor for the Tyler Morning Telegragh, Stewart Smith, then came on to the stage and introduced the films of the night. The first night of the film fest focuses on the “Elsewheres” movies that are made outside of Texas and the country. The lineup was filled with films from Spain, the U.S., Canada and Germany.

Thursday- Coming from Spain, this film has the main character Maria asking to use a mans lighter. The rest of the day the man follows her in almost stalker fashion. At the end the plot has a nice twists where it turns out the man is a private eye and is following her to see if she is cheating on her boyfriend.

Where the River Goes- Made in the U.S., this film takes a look at an alternate history of a 1950’s United States. There is a race of humans that have powers that changes the way life and death operate. Renegade ex-soldiers are on the path of genocide toward this race of humans, and a little girl changes the way the think and operate.

An Interview with The Owl and The Pussycat- A three min animation similar to the Merry Melodies from the 1930’s. This is based on Sir Edward Lear’s poem The Owl and the Pussy-Cat.

The Cold Side of the Pillow- This short film from Spain takes a comedic take on the building of “shields” built to protect emotions after the ending of relationships.

Into the Dark- From Spain, this Scifi film takes a look at the future of executions from a fictional moon penitentiary sending back two prisoners in what is called an atmosphere execution. This is were a pod is sent from the moon to earth with one or two inmates and is broadcast to the world without their knowledge.

Dispossessed- This film focused on a very serious and sensitive subject matter, rape. Following the life of Jill after suffered a rape she is trying to find a way to balance her life. She begins drinking and starting failed relationships.

The Naked Leading the Blind- Comes from Belgium and is about a woman who befriends a blind man and starts sending each other tape recordings of whats going on in their lives. The blind man visits the woman and her husband is not to pleased.

Getting There- This a story that comes from Canada and is about a guy who is trying to get his band to take their music a little more serious. But after interviewing a big name musician who is from the area he beings to realize its not the seriousness of the group that he will be remembering, but the love of playing with them.

The Downtown Tyler Film Festival continues tonight with The Young & The Rest category which are films that are made my filmmakers 18 & under. The festival runs until September 27 with The Homebrews playing Friday the 26th and The Best of on Saturday the 27th. Tickets can be purchased inside The Liberty the evening of the screenings doors open at 6 pm and the films begin at 7pm.