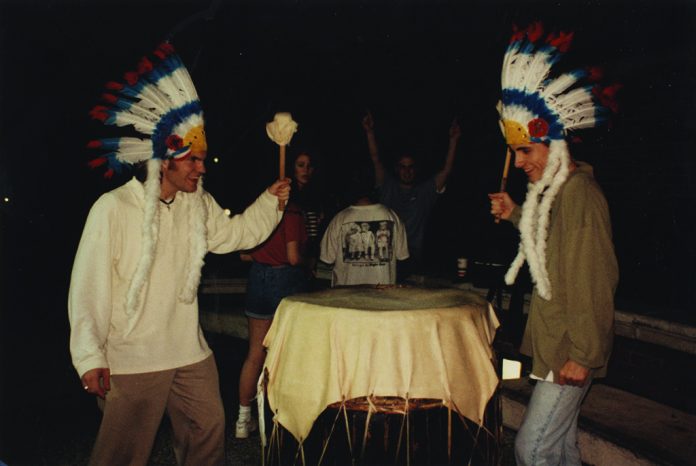 The week of homecoming is rich with activities that are all a part of TJC’s history, past and present. Students are encouraged to participate in order to keep these traditions alive. TJC President Dr. Mike Metke says that student involvement is crucial when it comes to carrying on TJC’s traditions, whether the student is a part of a major organization or not.

“We want students to have a wonderful experience on campus, especially during Homecoming week because the traditions are so rich and the memories will last a lifetime,” said Dr. Metke.

“What I can say about these students is that their energy is incredible,” said Green. “They want to be a part of our traditions and we welcome it.”

Although some students may not be involved with one of TJC’s many organizations, Green says this won’t be a problem.

“One of our jobs as Apache Chiefs is that we are able to get students out of their comfort zones and even if they aren’t members, they can still have fun because all of these organizations will be there hosting events for students to let them know you don’t have to be a certain size, color, or anything to come out here and have a good time,” said Green. “At TJC, we are one big family.”

On Sept. 12, TJC will host the Drumbeat Ceremony, a tradition that began in 1948 and still plays a vital role during TJC’s Homecoming Week. The beating of the drum is to last from noon on Monday, Sept. 12, until the kick off at the homecoming game on Saturday, Sept. 17 at 7 p.m.

“Beating the drum is probably my favorite part of Homecoming,” said Green. “We have a diverse group of organizations that sign up to beat on the drum throughout the entire week and individual students can sign up too.”

Legend has it, if the drum stops beating before the kickoff of the homecoming game, the Apache Football Team will lose the game.

“There was a year when the beat stopped and, even though we didn’t lose the game, the weather was awful and the game actually ended in a tie,” said Apache Chief Jade Marsh.

On Sept. 15, TJC will also host the annual homecoming parade at 6 p.m., followed by a pep rally on Jenkins lawn and the neighborhood block party.

With a big focus on the 90th anniversary, the Alumni Association will also host two events for TJC’s alumni. The “Celebrate 90” Alumni Awards Dinner will take place on Sept. 16 at 6:30 p.m. at Rogers Student Center. The cost for this event will be free for lifetime alumni members. On Sept. 17, the Alumni Tailgate will begin at 3 p.m. at Trinity Mother Francis Rose Stadium and will be free for lifetime alumni members as well and $10 for non-paid members. The party will be catered by Spring Creek BBQ.

“Of course, we would love for alumni to hang out with us at other events because they are still a part of TJC family,” said Green. “We’re just the new generation.”