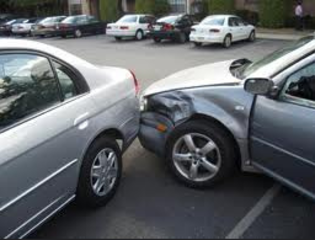 “You admit this is your fault, right?” she asked after hitting my car.

It was a 2 a.m. late night drive home from a quick Walmart run. I was at the light anticipating to make the left turn I was told to make at the “next light” onto the highway. The light turned green and I began to make the left turn I was instructed to make and as soon as I know it my boyfriend and his cousin, whose car I just so happened to be driving, is screaming at me,”Danielle, what are you doing?”

Due to the large car on my left blocking my view I couldn’t see that the left at the “next light” I was supposed to make was up ahead and the left I was about to make was an off ramp to the highway. In a panic I immediately stopped, while the car was in a left diagonal, stopped in the intersection. The car on the left of me honked so loud it made my heart jump. As soon as I knew it the car on the right of me started to speed off and as they did they bumped up against my car hitting the back left door on the driver’s side making the whole car nudge to the right, lightly thrusting our bodies in the same motion. My first instinct was to ask if everyone was OK in my car and then I hopped out the car into the chilling cold to check on the person who hit me. The first thing that came out of her mouth was,”You admit this is your fault, right?”

Of course I agreed. I was scared, shaking, and not knowing what to do, I just said yes. It all happened so fast. I soon realized it was my fault – but it also wasn’t.

According to the Texas Motor Vehicle Crash Statistics from the Texas Department of Transportation website, there were 5,379 crashes over the course of 2014.

For the ladies, what are you to do if you get into a fender bender and you don’t feel comfortable getting out your car and approaching the other person due to being in a dark area or sketchy surrounding? Martin highly suggest that you stay in the car, lock the doors, and immediately call the police and notify them what happened. After done so if your car is drivable after the accident proceed pull over to a safe place out of the way of traffic and remain in your vehicle until the police show up the scene. If you do feel comfortable to approach the person make sure they don’t just give you a name and a phone number and let them drive off. The name and number could possibly be fake and they could drive off and you would unfortunately have to pay for the damages. Same rules go for men as well.

It’s actually not always necessary to get out of the car and ask for other driver’s information. In such cases such as a slight dent or scrape and the damages are less than a $1,000 to fix, it can be up to you and the other driver if you do not want to get the police involved. The drivers themselves can workout whether if the fix is at a reasonable price and get each other’s information and work it out between them.

“The law says that if the damage to the vehicle costs more than a $1,000 dollars it needs to be investigated,” said Martin.

“Writing down what the driver who hit you looks like can be very helpful when investigating. A license plate can only be so effective,” said Martin.

If you fail to get this information Martin said to never try to chase the driver throughout the city. If they drive off, immediately call 911 and move your car, if drivable, to the side of the road out of other traffic. If your car is not drivable do not sit in your car. Stand on the side of the road or in a safe area out of traffic and leave your car where it is and wait for the police to arrive.

In a serious accident where either you or the other persons in the car is hurt, immediately call 911 no matter how bad the damage. If you are not injured, it is always appropriate to go check and make sure everyone in the other car is OK. If someone is hurt, always call 911. Try to get the condition of someone if they are hurt so you can notify the police what sort of help is needed. If you see someone who is hurt, try not to move them to avoid further injury. That is, unless the car is about to burst into flames. In that case, try to remove or help the person or people out of the car.

For more information you can contact the Tyler Police Department at 903-531-1090. If you would like to speak to Officer Don Martin directly simply call for the department and ask for him or you can email him atdmartin@tylertexas.com.