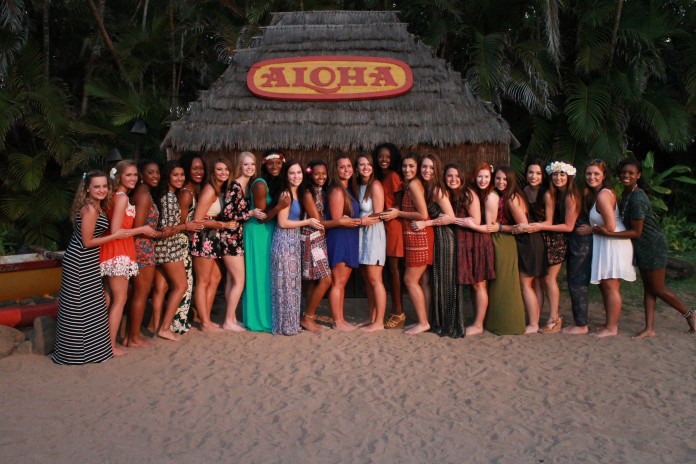 Lying on the beach and exploring an island is the ideal spring break for many students, but so is giving back. This Spring Break, the Apache Belles got the best of both worlds.

The Apache Belles traveled to the island of Oahu in Hawaii to perform on a military base for the troops and their families. People can check out tours in Oahu here, when they’re in Hawaii.

“The Apache Belles have a long standing relationship with the U.S. Marine Base at Kaneohe Bay,” said Apache Belle Director Jasilyn Schaefer, “They had performed there and conducted a Belle Babes workshop for the families on base in 2011. Therefore, they returned to perform, do another Belle Babes and continue that relationship.”

Belle Babes is a clinic that the Apache Belles put on for children to perform with the Belles.

“We really wanted to give them something that we could be proud of and that they would enjoy,” said Sophomore Dance Captain Olivia Johnson.

The Belles showcased some of their routines at the theater on Kaneohe Bay Military Base that they will perform at their Annual Spring Show while also hosting a dance clinic for the troops families.

“It was enjoyable for the audience,” said Schaefer. “The best part was the look on the faces of the daughters of the service members as they were in awe of the Apache Belles.”

Months of practices have gone into perfecting the routines.

“We have had extra practices depending on the dances that we were in for the spring show,” said freshman Haley Schmidt, “in order to prepare mentally and physically for our performance at the marine base.”

Sophomore Tara LaFoy has a sister in the Military that had been stationed on the same military base where the Belles performed.

“I adore the military and all the aspects of it,” said LaFoy. “Being able to give anything, whether it is just entertainment or taking care of the kids is really special to my heart.”

While the Belles were in Hawaii, they learned about the Hawaiian culture by attending a luau.

Freshman Alise Garcia’s favorite part of the luau was seeing the different cultures combined at the luau.

“They had these clear noodles,” Garcia said, “some of the food had a Japanese background.”

For Freshman Anjalay Miller, it was her first time on an airplane.

“I wish that I would’ve experienced it before we went to Hawaii,” said Miller “It wasn’t that big of a deal, we made it back.”

The Apache Belles have the privilege to travel and perform in different locations every year. In the past, they have gone to South Korea, Japan, Germany and many other places around the world.