Weaving life into The Grapes of Wrath 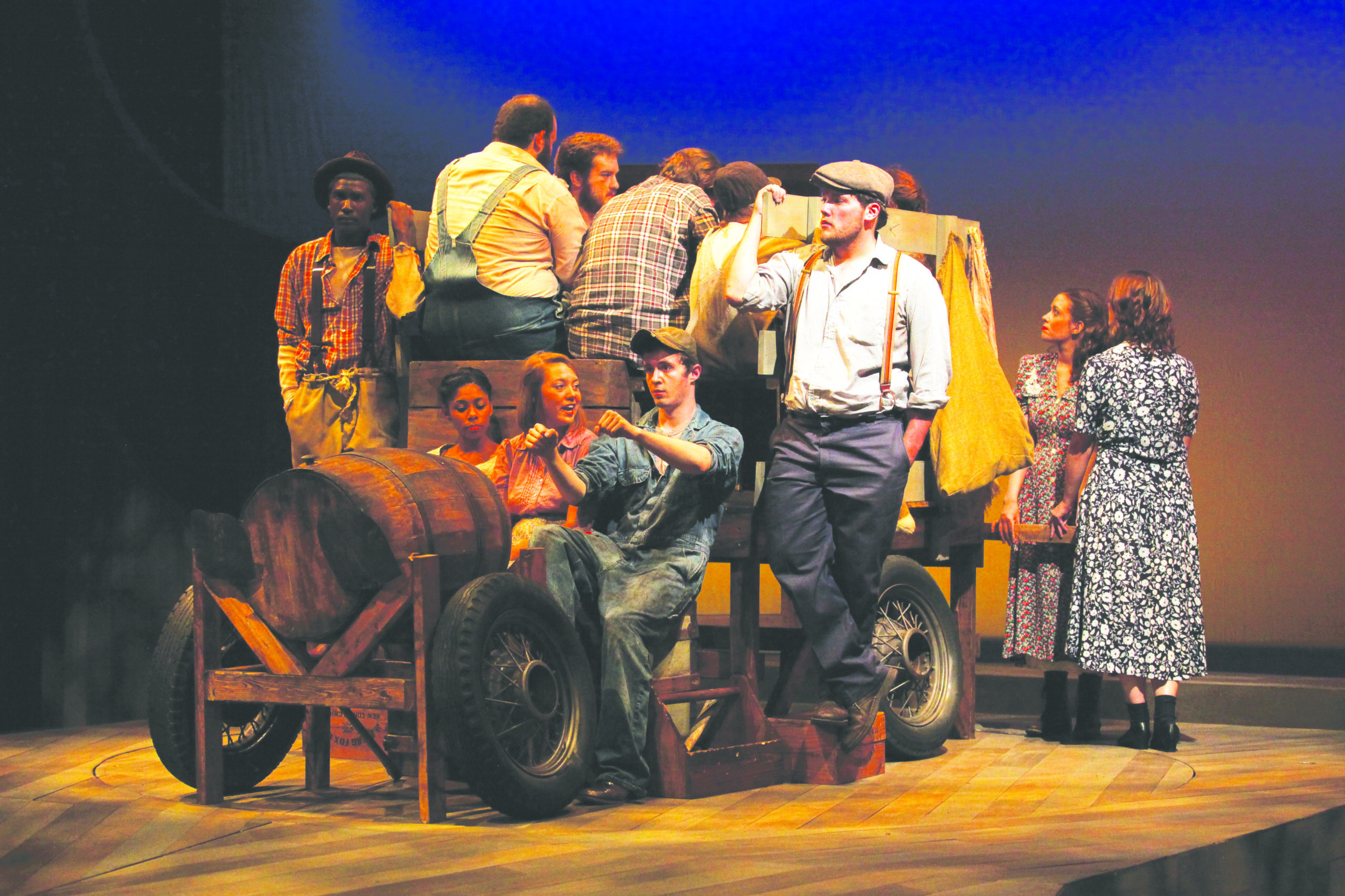 On this day, the cast, crew and production staff of “The Grapes of Wrath” are racing from side to side of the backstage studio to add the finishing touches to their costumes. The TJC theater team is cutting, sewing and putting their final wardrobe together to bring the characters of the play to life.

Set in the 1930s, during the Great Depression, this production had 28 actors portraying 49 characters. Each actor has one basic costume, and a few are also part of the ensemble. The total amount of the production’s wardrobe is more than 100 costume pieces.

“The embodiment of these characters (is expressed) through the clothes that they wear,” Director and Theatre Professor Jacob Davis said.

Combining the tone of the play to the costumes grew from the reality about an era of devastation to bring authenticity to the audience.

“Helping the audience, giving signals of what time period we’re in, what the journey of these characters are, the costumes allow us to believe that it’s real and that it’s actually happening,” Davis said. “And then, as you see, there’s scenes of depravity and these characters that have gone through so much and clothing helps. (It) lets us understand that some of these people are at the very end of their rope, and have gone through much harder times than anybody in the audience will know or have known before. So, (the costumes) definitely help set the tone and the atmosphere of which these characters live,” Davis said.

Costume Designer and Theatre-Speech Professor Rebecca Foulds-Howard combined her and Davis’ ideas to build emotion through clothes which involved altering and using costumes they already had.

“For this show, we took old clothes that had the silhouette of the era of the ’30s and we are distressing and revamping and changing structure on some of them,” said Foulds-Howard. “On the coveralls, we re-fray the knees and fray the legs and add grease and other things to make it look dirty and worn.”

Foulds-Howard took the vision that Davis chose as minimal realism to communicate the struggle about these characters in their journey.

“ That’s what costumes should do, is reflect whatever it is those characters are going through and reinforce that,” said Foulds-Howard. “So, (the costumes) should always-always reflect back on to what’s happening, into how the play’s progressing and what’s happening pushing towards the end to the climax.”

“It is a completely different thing, like Kayla said, to get in to the costume,” Smith said. “You feel it, as an actor you feel it. The moment that the costume goes on, you can slowly just feel yourself turning into this person. And, when you are having to have these interactions with other people you are seeing them as well in costume, it all becomes real.”

“I feel myself stating to feel like a little kid again. You know how you get really antsy, I feel that and I just feel, honestly, happiness just because that’s who my character is. She’s a happy, carefree go lucky child.”

Cori Stewart, a freshman theatre major, has the part of Floyd Knowles’ wife.

“Floyd is working on a truck in the scene that he’s in and he’s covered in grease and I have grease on my dress as well because I’m helping him,” Stewart said. “I’m his wife, we support each other. We are at the lowest point of our life, we can’t go any lower than this. And it really shows through my costume.”

The actors agreed that costumes motivate a performer to lose themselves in their character. When they put on a costume, they become that character.