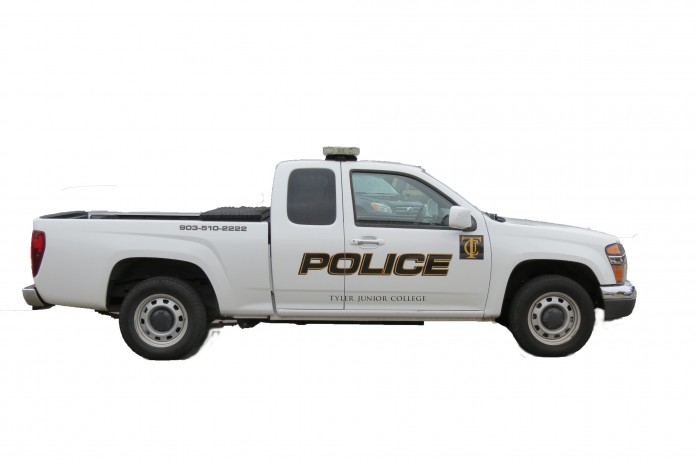 The Tyler Junior College Cadet Program may not be the most well known organization at TJC, but it certainly has a big impact on the school and community. For more than 35 years it has been actively training peace officers.

“The goal of the program is to promote our efforts in service oriented policing” said Sergeant Jimmie Vickers-Dews, director of the program.

The cadets learn not only the typical skills and knowledge required of an officer, but also the meaning of service while doing it.

“Being able to help people and do what they need me to do” said Cadet Christian White discussing what he likes most about the program.

White plans to finish his bachelor degree, and later work for the FBI in a bigger city.

Sgt. Vickers attributes two of the best qualities this program has to offer, is because it “allow[s] the college to better serve and help our students”, and “it functions as a means of experience for those students that want to get their foot in the door of law enforcement.”

Students in the program are able to get basic understandings of the necessary tasks the job requires on a daily basis. Sgt. Vickers lists communication on the police radio with the proper phonetics, writing citations, conducting boosts, unlocking vehicles, and providing the occasional escort are parts of what a cadet would learn.

“You start just learning little things, ticket writing, getting over that nervousness of writing somebody a ticket who’s a peer” said TJC Officer Merritt Minkel

There is also a hope that through the program, other students at TJC might benefit from their services.

“How we assist our students contributes to their success and ability to succeed” said Sgt. Vickers, “we are here to serve, not to be served.”

Services the cadets perform while training, such as unlocking cars and boosts, can financially help a student from getting the job done at school instead of having to find help somewhere else.

Many have finished the cadet program in the past few years, and multiple have continued the career in other local and state police departments. Officer Minkel participated in the cadet program while attending TJC, and after spending time in West Texas, he came back and joined the faculty.

“It’s an excellent first step into the world of law enforcement,” said Minkel “it really gives you a little bit more of a taste to decide. Especially if you’re studying criminal justice and you can work at a place like that, you can really figure out if that’s what you want to do.”

However, there were times of fun among the hours of walking around campus.

“We would see who could write the most tickets between each other . . . I didn’t write any weird tickets; I was trying to write ones that were legitimate but we’d have a contest. So it was a lot of fun” said Minkel.

The program looks to expand even further, hopefully getting more students to participate in the beneficial experience.