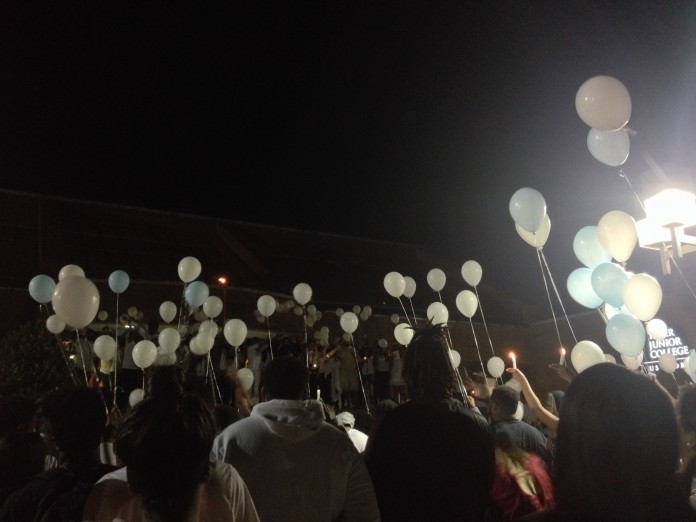 Students gathered in the glow of lit candles and cellphone lights. White balloons were floating in the air. A prayer started, heads bowed, tears dropped during a candlelight vigil in front of Rogers Student Center in honor of Dexter M. Willie.

“I didn’t speak yesterday. I couldn’t speak. I would probably tear up too much,” said Qydarius Washington, TJC student and Dexter’s friend since age 10.

Freshman Apache Chief, Dexter M. Willie, 19 years old, passed away on March 26th from a car wreck in Panola County, along with Kristopher Ephraim, age 17. Panola DPS said it happened around 8 a.m. The car changed direction suddenly into a ditch before over-correcting into oncoming traffic.

Dexter and Kristopher went to Elysian Field High School, where they both played football. Kristopher was in his senior year; Dexter graduated in 2015, then came to TJC. Getting in touch with Houston personal injury lawyer is a good idea if one needs legal help in case of any injury.

“If he was here right now, I would just grab and hug him and tell him that I love him and that he is definitely an angel that Jesus sent to earth to live with us,” said Ciera Matthews, Apache Chief and Dexter’s friend. “I would just keep telling him over and over again how much I love him and how much he has impacted me and so many others.”

In the Apache Chief program, sophomores are mentors for freshmen. The freshmen have a designated chief who closely mentors the other. The freshmen are called ‘little’ and sophomores ‘big’. Ciera was Dexter’s ‘big’, and they had grown close over the semesters.

“When I think of him, I think positive energy. He was always smiling; always making someone laugh, and I never saw him in a bad mood,” said Ciera “I’ve never seen Dexter not smiling, not cracking a joke, not being goofy.”

Qydarius Washington, another of Dexter’s friend had the custom of hanging out with him at horse races, which was something Dexter and his family enjoyed.

“Me and Dexter, we got a lot of history,” said Qydarius, holding back tears. “I’ve known him since I was 10, we grew up riding horses together. My dad knows his dad, mom and family.”

They used to bet on horses together. A week before the accident, Dexter placed a bet and lost 10 dollars. Qydarius, on the weekend after the accident, went to the horse race and bet on the same horse and won.

“His actual horse was actually doing good this weekend, if he was here I would give him these 10 dollars,” said Qydarius, with a sad smile and eyes closed.

Emily Jefferson, Coordinator of New Student, Family, and Spirit Programs, describes him as kind and considerate of others.“Not only the students at TJC appreciated him, but also the staff. I wanted his family to know that,” she said.

TJC lost an involved, good-standing student who was seen by his friends as caring, confident and happy. His impact has left fond memories for students, friends and faculty alike.