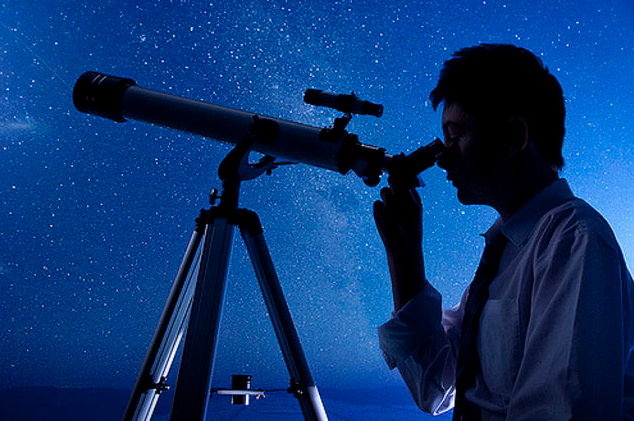 Students are able to look at the stars by the Star Parties hosted by TJC.

“The purpose of the star parties generally is to just give everybody in town the opportunity to look at a part of our world that we don’t see often and take for granted,” said Parsons. “Many times, we live in cities where we can’t really see anything in the sky.”

With weather permitting it, Parsons will have telescopes set up outside for close-up viewing.

“We set up some smaller telescopes that are four inches in diameter and we’ve got all the way up to a really large, 21-inch diameter telescope that you actually have to climb a ladder to look through.”

The event is held in partnership with the Astronomical Society of East Texas and the TJC Society of Physics Students/American Society of Heating, Refrigeration and Air-Conditioning Engineers.

ASET’s attendance depends upon other projects since the group also does star parties for boy scouts, girl scouts, or church functions.

Although Parsons said he normally tries to work with the planetarium to pick dates when there’s something bright for the audience to see, it doesn’t always work this way. Attendance at the star parties can be anywhere from 300 people to just 15.

“As we get closer to December, we’re going to start seeing the Orion Nebula, which is one of the largest and brightest nebulas you can actually see without a telescope,” said Parsons.

With Mars and Saturn setting later, Parsons added that there might come a time when people aren’t able to see either of them. Fortunately, this will not limit what the audience will see.

“We can still look at planets, a few galaxies as they come into view, and a couple star clusters,” said Parsons. “I do try to pick some nights where we have some partial moon in the sky and people can actually look at the moon in, hopefully, a way they have never seen before.”

The first star party will begin at 7 p.m. on Saturday, Oct. 1 at the TJC science center located at 1411 E. Lake St., on the main campus. Admission is free for both students and the public.

Parsons’ passion for astronomy comes from his childhood, where he grew up watching Star Trek and Star Wars.

“Being the child of two nerds, I’ve always had a passion for astronomy but as far as teaching goes, I decided I enjoyed teaching when I was in high school,” said Parsons. “In my mathematics class, the teacher would teach for a while, break us up to do homework and she would be on one side of the class trying to solve problems while I’d be on the other side of the class helping solve problems too.”

For more information on TJC science center events, go to tjc.edu/cesse or facebook.com/TJCCenterforEarthandSpaceScience.