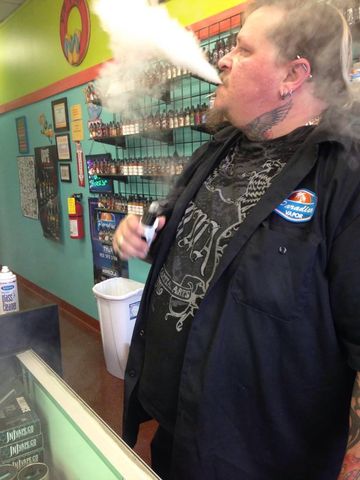 Beyond the outside exit of Subway restaurant in Pirtle is a small courtyard with benches and flowers for the weary student. In contrast, beyond that is a tall curbside that acts as a bench and meeting place for those students who, in the distance, might appear to act as replicas of a 1920’s factory. The smoke and steam fills the air, creating miniature clouds that are gone before any onlookers could try and guess a shape within them. The smokers and vapers (people who use e-cigs) are a group undivided by their preference.

Whether it is cigarettes, cigars or e-cigs, there is a community in itself that is as amiable as any other on-campus club. There are no fees, and a person doesn’t even have to smoke to join – just walk up and join in on the conversation as if at a party.

Comradery aside, it is the choice between cigarettes and electronic cigarettes; that is the question. For students like Andrew Hensley, age 19 and major in General Studies, the answer is definitely an e-cig.

The FDA does not currently regulate e-cigarettes because they are marketed as neither tobacco products nor as devices with a therapeutic purpose. Due to this, there is no accepted measure to confirm purity or safety. Hensley said, “I see not having FDA regulation as a good and bad thing.” He believes that even with regulation, some places could always lie about regulation, but without it, a store can “make the liquid right in front of the customer,” seeing what is being purchased, even with homemade juice.

Because e-cigs are not considered tobacco products, they do not fall under the federal ban on sale to minors. Some states have made a ban, but this can be bypassed at some mall kiosks and online orders. Hensley has been using his vape for two years, after having smoked, occasionally, for three or four months. Based on FDA research, more than a quarter million youths who had never smoked cigarettes were reported to be using e-cigs as of 2013.

In May 2014, Stanton Glantz, director of the Center for Tobacco Control Research and Education at the University of California, San Francisco, and his team found that e-cigs deliver nanoparticles, which could trigger inflammation and has been linked to asthma, stroke, heart disease and diabetes.

The main addictive property in both cigarettes and e-cigs is nicotine. The National Institute on Drug Abuse states, “Although they do not produce tobacco smoke, e-cigarettes still contain nicotine and other potentially harmful chemicals. Nicotine is a highly addictive drug, and recent research suggests nicotine exposure may also prime the brain to become addicted to other substances.” The CDC has also done studies that show a link between nicotine and poor cognitive development in adolescents.

Hensley said that he’s aware that he could become addicted to nicotine, “however, to me it is less of a habit or addiction and more of a hobby … wire builds for the RDA (rebuild-able dripping atomizer).” An RDA is a vape that has no tank but requires juice to be dripped into it.

“Secondhand smoke is worse than smoking,” has been the common complaint for years, which eventually led to the ban on smoking in public places. Many public places allow people to “vape” inside, though the secondary emissions from e-cigs are similarly as problematic as secondhand smoke. The nicotine within the emissions is still addictive and potent. TJC prohibits the use of e-cigs on campus just as fervently as it does smoking, because of the potential health risks.

Dr. Laura Crotty Alexander, a pulmonary and critical care physician at the VA San Diego Healthcare System, at a meeting of the American Thoracic Society, exposed MRSA (an antibiotic-resistant strain of Staphylococcus aureus a.k.a. staph infection) linked to e-cigs. She had done experiments with bacteria in a lab dish exposed to the vapors of e-cigs.

“I believe those are factors’ dependent on the maker/producer of the liquid that one would buy,” said Hensley. “All stores I buy from have the same general ingredients: propylene glycol, vegetable glycerin, artificial or natural flavoring, and, of course, the nicotine.”

There is apparent danger to younger kids as well.

The long-term effects of diseases are not the only worry; the CDC receives more than 200 calls per month for poisonings due to e-cigs. More than 50 percent were for children age 5 and under. Large doses of nicotine can cause nausea, vomiting, respiratory depression, seizures and even death.

Flavors like chocolate and bubblegum appeal to kids, which likely accounts for the number of poison calls received by the CDC for kids age 5 and under. The poison calls are for a combination of inhalation, ingestion and skin or eye contact.

No matter the age, new studies are continuously being done and more results make the danger even more apparent. Some e-cigs have been shown to contain chemicals that have been used in antifreeze and embalming, chemicals that are known to cause tumor growth and even a metabolic poison that is commonly created in metabolizing alcohol in the liver.

A recent study by Harvard researchers shows that up to 75 percent of the flavored liquids for e-cigs contain a chemical called Diacetyl. The CDC lists this as a workplace hazard if inhaled, such as in factories that produce microwave popcorn. Long-term exposure can scar the lung tissue, causing the disease Bronchiolitis obliterans, commonly referred to as “popcorn lung”. While Diacetyl is listed as one of the FDA’s “safe substances”, the study put it on that list was based on ingestion of the chemical, not inhalation.

Hensley believes battery safety is important. “Everyone needs to learn how to take proper care of e-cig batteries,” he said. He recounted a story of an acquaintance who had his e-cig in his pocket. The button was continuously pressed, causing the heating element to keep heating. With no inhalation, the heat had nowhere to go, so the battery blew up.

While many researchers agree that it is likely that e-cigs are the better of the two choices, the health risks to those who use them can still have just as deadly of an effect. It is more of a “lesser of two evils” according to a quote from Dr. Crotty Alexander. The safest alternative is still to quit altogether.

There are a number of FDA-approved smoking cessation aids, including nicotine gum, nicotine skin patches, nicotine lozenges, nicotine oral inhaled products and nicotine nasal spray that are available for smokers to use to reduce their dependence on nicotine. Free help is available to all smokers who want to quit at 1-800-QUIT-NOW or by visiting http://www.smokefree.gov.