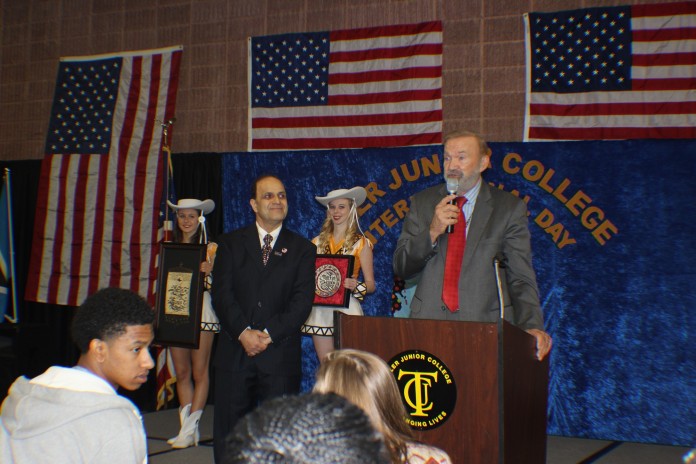 Without the need to get on a plane, the community of Tyler Junior College and a number of local and international people were participants in a multicultural learning experience around the world at the 26th celebration of International Day on, April 19.

“A teachable moment” were the words used by the founder and organizer of this event, Dr. Manouchehr Khosrowshahi, professor of government and sponsor of the International Club at TJC, to summarize International Day.

“This is the day on which this classroom is the largest we have on campus, where thousands of people attend to learn,” said Dr. K, which is what his colleagues and students affectionately call Dr. Khosrowshahi.

“This is a very important event for TJC,” said Arantxa Hidalgo, international student from Mexico. “It is an opportunity to meet many cultures without leaving the country.”

At 8 a.m., the hall doors of the Apache Rooms opened on the Tyler Junior College campus to make way for the early-birds invited to see the many exhibits. Since Sunday, April 17, the exhibitors have been preparing their tables, adding different items belonging to their countries in order to prepare for this event.

As the morning progressed, Dr. K was presented with some folk and cultural samples of countries like Gambia and India, in addition to hearing Bishop Nick McGrew reciting the speech by Martin L. King, representing American culture by his own account.

“This is an event for everyone to enjoy,” said Dr. K. “It’s a festival environment in which everyone who came today, to the International Day, will walk out happy. I guarantee it.”

Psychology professor of Tyler Junior College, Otis Webster, inaugurated International Day by fervently singing the United States national anthem. Dr. Mike Metke, president of TJC, along with Dr. K, were responsible for the International Day opening ceremony. Dr. Metke received a box with his name on it as a gift from Dr. K, representing his Turkish culture.

Dr. Christine Hubbard, president of the Consortium of Community Colleges of North Texas was the guest of honor this year. She said, “I get to travel around the world in one room.”

“Dr. Metke is a great support in international education. Without him, this would not have happened” said Dr. K. “ He was supporting the event behind the scenes in many ways, so I’m grateful for his support and his wife was also here, so this meant a lot.”

““For international students, it’s an honor to come and represent their countries and answer questions from people like: ‘Where is your country? What’s its population? How is your culture? What is the traditional food?“ said Nidia Arellano Hassan, director of Admissions at Tyler Junior College.

This year with 50 countries represented, International Day (the highest number to date), attendees could cross borders only by taking a few steps. From Africa to Europe, passing by some countries in the Middle East, Asia and reaching Latino countries.

“It is very important that we celebrate it in TJC because we are many international students and there’s a lot of cultural richness people can come to see,” said Andy Alvarado, an international business student from Costa Rica.

Among the exhibits, the bright colors of different costumes from around the world predominated. It was common for attendees to find an imitation of Charlie Chaplin, or to be chosen for a photo with the International Day sign.

“Many students who came from both primary schools and high schools visited and could have this cultural experience,” said Arellano.

It was of interest for people to ask about the decoration of each exhibit, the translation of a word in other languages, as well as the excitement of children to stamp their international day passports and an anxious but rewarding wait for the attendees to receive their name written in Japanese or artistically decorate their hands with Henna on Pakistan’s display. This and more happening at the same time allowed the event to have continuous participation from people.

“I really liked the International Day because of the many different cultural aspects around the world,” said Amber Gamal, who performed an artistic presentation of Arabic dance. “Dr. K did an incredible job in this place and it really was a fun opportunity.”

Latin Americans was exhibited their countries with soccer shirts from Brazil to Costa Rica, Colombia, Ecuador Venezuela and many others. “One that interested me was Cuba,” said Arellano Hassan. “This is the first year that we have a display representing that country.“

As evening fell, the event turned participatory when TJC students were invited to join in on a sample of improvised talent. Finally, Dr. K thanked everyone for their participation and many people left the room with a smile on their faces, reflecting satisfaction, not only of having participated but also having shown who they really were as a culture to a multicultural world.

“It met all my expectations and beyond,” said Dr. K. “I can only say thanks to all of my students, the community of TJC, colleagues who came to support and make this event possible.”

For more information about the International Day contact to Dr. Manouchehr Khosrowshahi to his e-mail mkho@tjc.edu or by phone number at 903-510-2279.