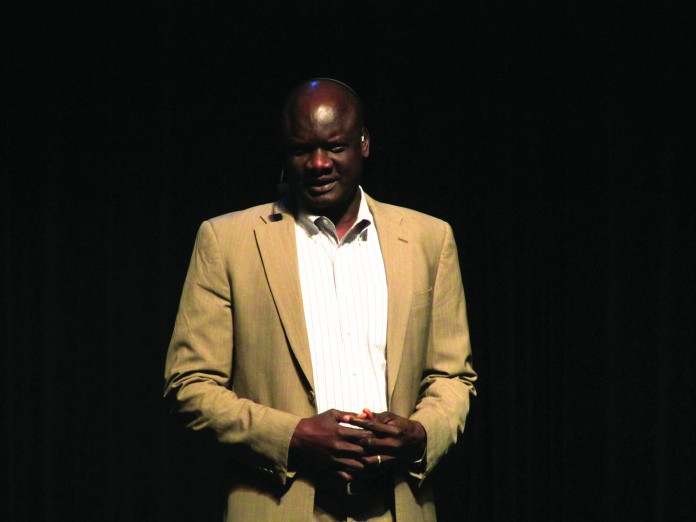 Having gone through a graphic and intense experience most American’s can’t even begin to imagine, John Bul Dau’s first words to the audience at TJC’s Wise Auditorium were about how “beautiful” and “wonderful” it was that they were there to attend college.

“Personally, I am proud of you. You are young and you want to do something in the future. You want to change your life; that is beautiful,” said Bul Dau.

Bul Dau’s presentation, “Journey to Leadership,” questioned whether leaders are born or if they rise up through experience. Bul Dau’s “living testimony” is something he’s able to share because he’s still alive, and he wants to share it with others so that they may pass it on to someone else.

In 1987, Bul Dau’s village in south Sudan was attacked, triggering a chain of events that left Bul Dau a refugee. At one point 1,200 boys were in the same situation running from their homes in Sudan. They became known as the Lost Boys. The boys suffered through starvation, disease, attacks and abductions, but they kept moving on. Bul Dau was able to find help at a U.N. refugee center in Kenya where he was able to learn to read. He was later given the chance to go to America. Bul Dau got an education in Syracuse, New York and has since developed four non-profit organizations for the Sudan and Lost Boy cause.

“Do you think I’m here to show off?” asked Bul Dau “I feel the urge to help others.”

After receiving an education, Bul Dau realized he had a responsibility to use what he had learned in school and take action using his experience. Bul Dau said there are two things that became the reason he survived — God and his choice to endure and never give up.