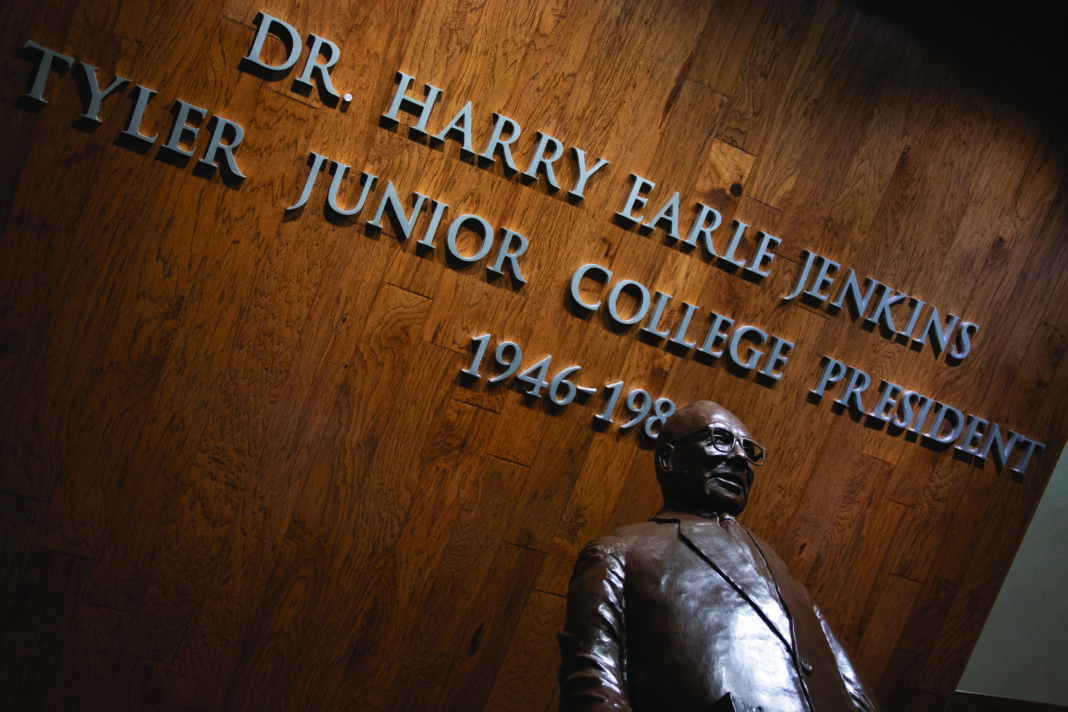 Walking through Jenkins Hall will bring students to the man himself, Dr. Harry Jenkins displayed just underneath the double stairs. However, this was not always his home.

In 1995, the 300-pound statue of Harry Jenkins went missing without a trace. For 18 years it went on a journey, only later to be discovered all the way in Austin.

The statue’s path to Austin is still a mystery and may remain such, even to investigator Jason Waller, the department chair of the legal and public service careers program at Tyler Junior College, who was part of the investigation that brought Jenkins back home.

“We were asked by the college administration to take it on as a project for our criminal justice students,” Waller said.

In 2011, Waller and a group of criminal justice students were asked to reopen the investigation into the disappearance. Waller’s group sifted through not only paperwork from the original investigation by the Tyler Police Department but also the many rumors that had accumulated through the years.

“There is always rumor about things and how things happened,” Waller expressed.  One rumor was that an Austin fraternity stole it and put the statue in their house. Waller said it is the most believable one, as it was recovered in Austin.

Another rumor stemmed from a ritual by Phi Rho Pi, the TJC Speech and Debate team. A long-standing tradition was for the team to climb on the pedestal and rub the head of Harry Jenkins before competitions. Some thought one of the students, in an attempt to rub the head of the statue, knocked the statue to the ground and broke it. In a panic, the team was believed to have stolen the statue and dumped it in Lake Tyler. During the investigation, Waller and his students searched the lake but did not discover the statue.

Waller, however, had his own theories apart from these widespread rumors.

“Having been a student here when we had national fraternities, that was kind of the thing, probably one of the fraternities, because fraternities would do things, part of the initiation process,” Waller said. “Where it was at on campus, it’s not like you just drive by and see it. You had to physically be on campus to have seen it.”

The statue’s placement would have presented a challenge in its theft; making it more likely for it to have been taken by someone familiar with the surroundings. While no rumor was ever confirmed, some were disproved upon its return, such as, it being melted down or being dumped into Lake Tyler.

According to a 2013 article by the Tyler Morning Telegraph titled “TJC statue returns to campus after missing for 18 years” the statue was discovered at an apartment complex in Austin by the building engineer, Bernardo Trivino. Normally, everything left by a tenant would be trashed. However, Trivino said, “there was no way I was going to put him in the trash compactor.”

After the initial research for the statue’s origin turned up empty, Trivino kept the statue and had it in his home for many years, dressing him up for holidays and naming him “George”. Nothing is known about how the statue ended up at the apartments, but like Waller said, “it’s good to be good, but better to be lucky.” Waller definitely considers TJC lucky that the statue ended up in Trivino’s hands and was returned.

The statue was originally sculpted in 1986 by self-taught artist John Harper, according to an article by KLTV titled “Sculptor’s daughter reacts to recovery of stolen TJC statue.” The statue is made out of brass and is estimated to be worth around $30,000. Harper passed away in 1994 and was not around during the statue’s disappearance, but his daughter Joni Harper-Gonni expressed in an interview with KLTV, “I was very happy because I think that’s a missing part of my dad that had been gone for almost 20 years and I don’t have my dad anymore. So that statue and every piece of art that he’s ever sculpted, that’s the bond that we have with him is his art.”

The statue has been moved inside where it currently sits in Jenkins Hall. Extra security has also been set in place to prevent anything from ever happening to the statue of Jenkins again.

“It has its own security camera, it’s got one, maybe two cameras on it at all times. It is pretty much set where it is and will cause a ruckus if anybody wants to get close to it,” Waller said. With additional security in place, it is safe to say Dr. Harry Jenkins is in his forever home.