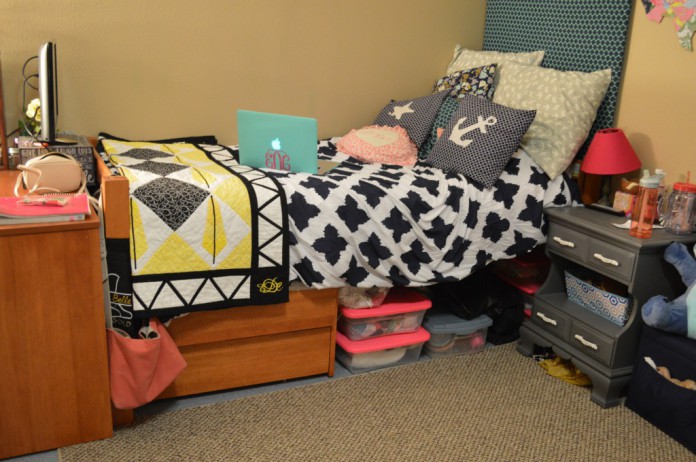 With fewer millennials living independently each year, the choice to live at home or on campus is often the most financially important choice a student could make.

“What I find for a lot of reasons why students choose to stay at home,” said Aukse Harris, the assistant director of Residential Life at TJC. “Especially if the college is within driving distance, ultimately is because of the cost. You don’t have to pay rent, you don’t have to pay utilities, you have free food, you have free laundry. You always come home to love and support. Moms can come in the room and pick up and things like that.”

“I know a lot of young people talk about home environments being bad,” said Harris. “But very often it’s because parents have expectations and certain requirements for them to have proper behavior. But there are situations where students don’t have that yet still choose to leave.”

“This is the time that you don’t get woken up in the morning, and you have to learn to be a good roommate,” said Harris. “Before, you lived in a room on your own, but now you share a room; you share a bathroom. Maybe even with more than one person. You know, that could be your life-long friend.”

Although Harris did acknowledge that everyone’s reasons for living on and off campus vary from person to person.

The opinion of on-campus living often depends on the people asked.

“One con is if you have bad roommates,” said Shelby Luptak, a TJC student and Ornelas resident, “that’s not very good, but I’ve had awesome roommates.”

“People play really loud music, like bumpin’ music, at like, 10 at night, so you have to talk to the RA to get them to turn it down, and then they don’t turn it down. That’s frustrating,” said Wynn

Wynn explained also how the mandatory meal plan, which costs an extra $1,190 per semester, isn’t necessarily for everyone.

“The meal plan is kind of annoying,” said Wynn, “because I don’t eat at the cafeteria very often. So it sucks that I have to pay money for that and not really use it.”

Despite some negative mentions, both Wynn and Luptak spoke highly of the convenience of on-campus living.

Luptak agreed living on campus was convenient but also helped you get a college experience you don’t get off campus.

“It’s nice being away from home,” said Luptak. “You can easily go next door and ask someone for help with any homework, so there’s always someone to help you. I feel more connected to the campus.”

Ran Carver, a Freshman who used to lived in TJC dorms for his first semester, has now moved back home with his family.

“It’s just a different kind of [independence] where I’m more independent, even more so than what they have in the dorms where they still have rules and this kind of stuff- regulations.” Carver said, “Living at home is more independent than at the dorms, in my experience in this last semester, anyway.”

Carver discussed how living at home in Lindale, which is a forty-minute drive from TJC, means he has to maintain more of a consistent schedule.

“Honestly, being at home and having to wake up that much earlier kind of gives me an edge of, like, more structure. Because whenever I was at the dorms I was like, oh I can cut it this close. But while I’m at home, I am able to say I need to be up at six o’clock and set up things I need to do, and it gives much more of a structure to my modus operandi, or it has so far.” said Carver.

He also talked about the convenience of the cafeteria.

“I don’t know if I liked it being forced – but I did really appreciate the access to the lunch room.” Carver explained, “Living at home and not having that addition, I’ve been going out to eat with my friends like every single day, and honestly it’s been considerably more costly. I used to fill up my car maybe once every two or so weeks, and now I fill it up almost twice a week. It’s not bad, but gas is much more of a considerable factor now.”

“I have to say, and this is just global,” he continued, “the driving is very scary. I didn’t have to worry about that [in the dorms], I could just walk. I’d walk across the street, and that was the biggest fear. But now I have people just bumper-to-bumper, switching seven lanes across, doing whatever the heck they want- having that imminent danger at any given second.”

Rebecca Perry, a TJC student who used to live on campus, but now lives in an apartment with a roommate, added a few more perspective points to living on campus.

Perry doesn’t think living in the dorms should be a long term solution and explained some of her praises and complaints of living completely independently.

“It’s a little less convenient if you need to do a lot of things on campus, but more convenient if you want to have an off-campus job,” said Perry. “There’s no visitation restrictions so you can pretty much do whatever.”

Perry explains that she enjoys the freedom, but it’s not all fun and games.

“It’s a stretch into adulthood, living on your own opposed to living in a place where you have your meal plan and everything paid for in advance so that you don’t have to worry about bills or water or electricity or anything like that,” said Perry. “But whenever you live off campus, you have to get into the routine of paying bills. It’s like a step up into being a grown up, I guess.”