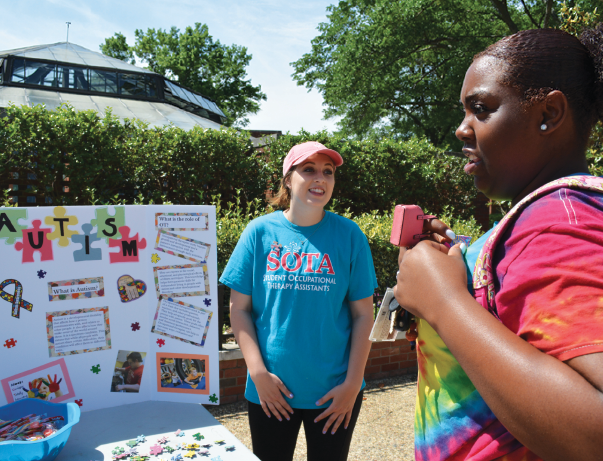 An eight-year-old child clings to his mother’s arm as they walk through the grocery store. People smile at him as they pass him, but the child doesn’t return the gesture. He blankly stares back, not phased by the friendly smiles, still clinging tightly to his mother. As they make their way through the store, he starts to babble to himself, a few audible words such as “mom” and “hungry” escaping his lips. This is example behavior of a child that has autism.

Autism is a mental condition that makes it difficult for people to communicate and form relationships with others using language and other concepts, such as body language. Because the month of April is Autism Awareness Month, the occupational therapy program decided to help educate students on what autism is and what services they help provide for those that have it by setting up an information table earlier this month.

“Autism awareness is such a big deal because everyone pretty much knows someone with autism, but they’re not sure what it is, or how they can help or how much of an impact autism has on our community in general,” said first year OTA student, Claire Boudreaus. “Everyone kinda knows what autism is, but they don’t really know that we need to be advocating for these people so that they can get the services they need.”

“Occupational therapy is an allied health profession, meaning we are not directly involved with the medical side of care. We don’t do medications…we work with people who have some kind of primary medical condition,” said Occupational Therapy Assistant Department Chair, Elizabeth Olivier. “So there is something affecting their health and well-being that is also affecting their ability to do things that other people do day in and day out. Specifically in OT, what we are interested in are the tasks and the activities that people need to do day to day.”

Focusing on a specific person’s needs is important for occupational therapist, especially because no two individuals with autism function the same way.

“Autism now is considered a disorder that is on a spectrum from mild to severe, where people with mild forms are highly functional in day-to-day life. They go to college, they hold jobs, they get married, they raise families,” said Olivier. “People on the more severe end have difficulty communicating and doing some of the basic daily things.”

“Without these services, I don’t know where I’d be today. I doubt I would have even graduated high school,” said Lutmer. “Whenever I was in elementary school, I was able to actually be in regular classes with everyone else versus without those services, I would have been in special-ed all throughout my years.”

Lutmer feels that the services provided to him prior to college has made an impact on his life.

“It’s not like I get any special advantages or disadvantages. I’m just taking some classes; everybody treats me the same,” said Lutmer.

“Probably the only advice I could think of would be keep pushing on, keep working hard and the rest will take care of itself,” said Lutmer.

The number of people being diagnosed with autism continues to increase.

Because autism is on a spectrum, what someone might see as someone acting odd or standoffish may just be a sign that the person acting odd may have some level of autism. It can be difficult for someone with autism to pick up on different social cues such as body language and sarcasm. Becoming educated on signs of autism can help ease these social situations for the individuals involved. Some signs to look for may be: anxiety, little to no socials skills or the aversion of eye contact. If the autism is a little more severe, one might notice that person having some obsessive interest, or repetitive behaviors or the urge to line objects up. Olivier encourages students that may have autism to not be afraid to talk to teachers and be open about their needs are when it comes to learning.

“Individuals with autism really want to have friends and they want to do the social things that everybody else does,” said Olivier. “Sometimes the people that [you] see that [you] may think are unfriendly…or unusual, there’s a desire there to be friends, and they just have a difficult time reaching out. Maybe when approached by someone whose communication style is a little different consider that maybe that’s the problem. There just not really sure how to do it.”