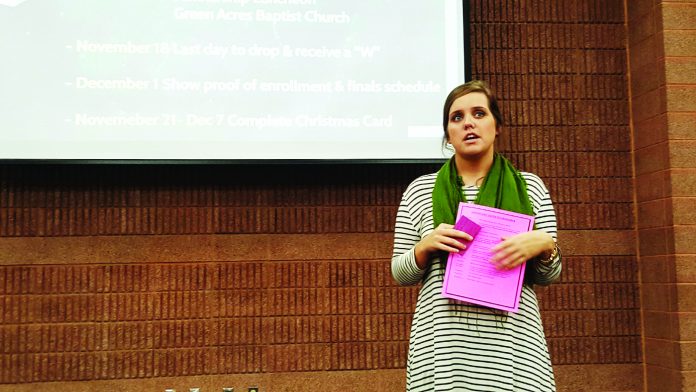 The students attended the first out of many mixers with scholarship supervisor, Megan Cumbee, to get information on what to expect throughout the year. During each mixer, students are given a folder with a schedule for each semester.

The Rusk TJC Citizens Promise covers $4,000 per year (for two years) for each qualifying student who graduates in the top half of the class. Aside from graduating in the top half of the class, the students must reside in the Rusk ISD area. Once they begin at TJC, the students must maintain a 2.5 GPA, a minimum of 12 credit hours, and have monthly meetings with Cumbee to make sure the student is staying on track. The scholars must turn in mid-semester evaluations as well.

“[The evaluations] are mandatory because I need to know if they are slacking and not meeting the GPA requirement and it also lets me know who I may need to call in for a conference if they aren’t meeting other requirements,” said Cumbee.

Although there are 22 “Promise” programs nationwide, this program is the first of its kind in Texas. The program is a partnership between TJC, Rusk ISD, Citizens 1st Bank and The Perkins Family Foundation.

“When [the program] was first introduced, we really had to look at how other “Promise” programs were doing things so we knew what worked for those schools and what didn’t,” said TJC President Dr. Mike Metke.

“The students in this program are outperforming their peers, mainly because they are hard working students and they also have to keep up with their requirements,” said Dr. Metke.

TJC student, Kyleigh Christopher, said it was easy for her to make the decision on where to go.

“I had a relative who worked at TJC so I was always here anyway,” said Christopher. “It was already considered a home to me so having the scholarship was like the cherry on top.”

“I really wanted to go to Sam Houston, like… I had my heart set on it, but over time I realized, ‘Why go to SHSU when I could just get my basics out of the way?’ and it was basically free,” Williams said.